Find out more about the people behind the 2017 Alteiro Spinelli Prize for Outreach.

In our series of monthly interviews posted on social media, we meet each time one of the key IE team members to help you get to know the faces behind the organisation. This time, instead of presenting one member, we highlighted a group effort from our members that resulted in the European Commission’s 2017 â€Altiero Spinelli Prize for Outreach’ and we thought you might like to read more about it here. The Prize rewards outstanding contributions that communicate the EU – its founding values, history, action and key benefits – to wider society, enhance citizens’ understanding of the EU, broaden the ownership of the European project and build trust in the EU.

The study, Engaging citizens with Europe’s cultural heritage, won a first prize. The paper is a contribution from Interpret Europe to the European Year of Cultural Heritage (EYCH 2018). It briefly introduces the basic qualities of heritage interpretation, as well as some of the most recent findings about the wider European public, values and mental frames. Based on this review, it offers recommendations on how to engage citizens with Europe’s cultural heritage.

We asked IEÂ´s Managing Director, Thorsten Ludwig, to tell us a bit more about the study, its findings and the award.

When and how did the idea arise to write a study on engaging citizens with Europe’s cultural heritage?

The initial catalyst was a workshop that I ran in spring 2017 for the European Commission’s EYCH Task Force. It was about the relevance of values and mental frames and how heritage interpretation could include European aspects. We had just one day but the group found our approach very interesting and asked for some written information. A call for EU funding of EYCH-related projects was in the pipeline but it soon became clear that the timing would not coincide if we wanted to present the paper in time to prepare for the EYCH. So, we rolled up our sleeves and wrote the study on a voluntary basis.

The study is a group effort from IE members – How did the process of producing the paper unfold?

We didn’t have much time, so I basically drafted the main text from the workshop presentation and passed it for comments and additions to Patrick Lehnes, our Cultural Heritage Coordinator, and Valya Stergioti, our Training Coordinator. In parallel, we sent out a call to all our members for contributions, especially examples of how heritage can be interpreted in a European context. Many members answered and within two weeks we received several relevant examples and included ten of them in the study. Throughout the process we also had some fruitful discussions which helped improve the study. Finally, Michael Glen proofread the text, Bettina Lehnes designed the cover, and we subsequently managed to complete the publication before the next meeting of the EYCH Stakeholder Committee. It’s not the first time that IE has pulled out all the stops to come up with a remarkable result in such a short time. It’s always exciting and really encouraging if our members contribute to such requests within a few days and I think this also impressed the Commission.

What is the basic idea of the paper and how is it actually rooted in IE?

The basic idea relates to some aspects that we have discussed in IE since 2015, when we began re-thinking the central role of personal meaning-making and how to involve â€the audience’ more actively by supporting and facilitating their own interpretation. The first key event where we linked this to European challenges was our 2015 IE Conference in KrakĂłw on â€śSensitive heritage – sensitive interpretationâ€ť. Willem Derde presented a session on this subject; a workshop which, at that time, was rather poorly attended. Nevertheless, we continued working on it. With the debate about Brexit, the subject became even more relevant and it culminated in our 2016 IE Conference on â€śHeritage interpretation – for the Future of Europeâ€ť, where the focus was very much on citizenship involvement. It also featured in the â€śCall from Mechelenâ€ť which asked our members â€śto re-engage with those ideals on which Europe is builtâ€ť and to encourage citizens to â€śvisit their heritage sites to reconsider what our shared European values mean to usâ€ť. In 2017, at the IE â€śCrossing bordersâ€ť Spring Event, in Prague, we discussed what might follow from this, especially for the basic qualities we promote in training. The Prague proceedings also included a long article on how to deal with populist movements. This actually turned out to be one of the most popular and debated parallel sessions. Finally, we added values and mental frames to the curricula of our trainer courses, as working with frames requires some responsibilities that IE trainers should be aware of. So, what I presented at the workshop in June 2017 in Brussels was basically the result of two years’ worth of exchanges. This also explains why the study was compiled in such a short time.

How does the study actually relate to the European Year of Cultural Heritage?

The Year focuses on activities covering four different fields. The first is engagement. We argue that it is important to look at cultural heritage not just as a source of income, as is often the case. Of course, prosperity is important but â€śEurope is no supermarketâ€ť, as Emmanuel Macron once said. The promise of a European cornucopia is not a valid foundation for European citizens who need to stand together in good times and bad, otherwise we will have to face the situation we now have in the UK more often. The relevance of Europe’s shared values does not depend on economic upturns, it relies on the heritage that we all share and embrace. Europe’s heritage is the true treasure of the European project and we are convinced that encouraging citizens to interpret this heritage in the context of Europe’s shared values is essential for a shared European future. This is what IE is communicating during the Year.

Although it is obvious that the paper has been well received at European level, what does it mean for practitioners at local sites? Do you expect them to now devise themes on Europe’s shared values for all guided walks, exhibitions, etc.?

They don’t necessarily need to turn them into themes, but they should consider it. The difference is that in the first case they would trigger debates on the subject which might suit some places (e.g. sites that have been awarded the European Heritage Label) but not the majority. Why? Because many of those taking part in interpretive activities may simply not want to be bothered with this. If I visit an old castle during my holidays, I don’t want to be taught about the relevance of citizenship building. However, the way that interpretive activities are arranged can either hinder or support Europe’s shared values. People can be encouraged to make up their own mind instead of listening to what someone is telling them, they can share their own experiences and build their own meanings. In other words, this is about supporting citizenship building without even mentioning the term. This way, we can review a range of our activities to find out whether they support ideas such as human dignity, equality and solidarity, etc. Heritage interpretation can offer the opportunity to practice these values at very different sites, again, without even mentioning them. Of course, this can mean challenging some of the practices we’ve used in our profession over the past decades.

What has been done in terms of the outreach of the study?

So far, the EYCH Task Force has distributed the paper to about 40 members of the EYCH Stakeholder Committee and to around 30 EYCH National Coordinators. The feedback has been really encouraging, although I’m sure that many didn’t have time to read all 50 pages. The fact that we received the Altiero Spinelli Prize, attended the Award Ceremony in Brussels with Commissioner Tibor Navracsics and the President of the European Parliament, Antonio Tajani, and had the opportunity to speak about the study at a panel during the European Cultural Heritage Summit in Berlin, will definitely increase interest. On the other hand, we must be aware that the paper being welcomed in Brussels is not sufficient outreach in itself. The paper’s actual value would be to inspire those who feel their work isn’t related to the European project. For example, by reaching thousands of smaller local sites or museums throughout Europe. To reach those practitioners also depends on people explaining this at regional or local level. About 25% of our members are active guides but I’m sure not all of them will take up the initiative on their own. This is why we made a special suggestion in the study to train young people as interpretive agents. Maybe we can convince the European Commission to include this in the European Action Plan for Cultural Heritage which is due to be discussed soon.

How can an award for outreach help in building communities?

If we look at IE as â€our community’, part of our first strategic goal is to encourage members to take responsibility within the network. Initiatives like developing the study contribute significantly to this, even without awards. Our â€honours and accolades’ are simply to feel what we can achieve something together, to experience a clear purpose in our own activities, and to feel that they are independent from external funding and resulting obligations. These are key drivers of all volunteer work and most of the work of IE has to be done on a voluntary basis. However, the award itself does help build our community in at least two ways. Firstly, and very simply, it boosts our income at a time when we would like to offer our teams more opportunities to interact and to support our country coordinators in increasing the membership in their countries. For example, we now offer all of them to be trained as IE trainers. Secondly, the award increases our profile and our reputation at European level, so we might convince the cultural heritage community that heritage interpretation deserves more attention. Being accepted among the many other heritage stakeholder organisations in our specific role of reflecting upon ways to communicate, brings us closer to our mission of serving all who use first-hand experiences to give natural and cultural heritage a deeper meaning.

Janja Sivec runs NGO Legends, working as a trainer, guide and consultant. She is also an IE certified trainer, IEÂ´s Country Coordinator for Slovenia and volunteers in the Social Media Team. She is hooked to everything â€e’ and can be contacted at: janja.sivec@dlegende.com

Thorsten Ludwig is Managing Director of Interpret Europe and runs his own consultancy, Bildungswerk Interpretation, in Germany. You can get in touch with him at: thorsten.ludwig@interpret-europe.net. 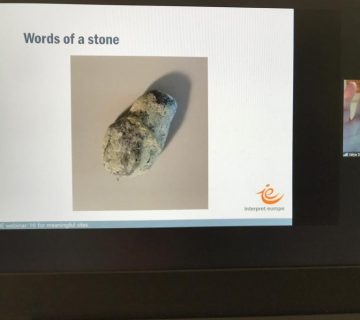 Interpreting food with your guests

Kate Clark is our special guest and she’ll share her extensive experience to answer these questions at a workshop, on Day 2 of IE web conference: Recreating tourism through heritage interpretation. #iecon21Join us www.interpreteuropeconference.net/ ... See MoreSee Less

#CulturalDealEU needs your support‼️✅ Do you believe that there is no recovery or future of Europe without culture?✅ Do you see culture as an integral part of the sustainable development?✅ Do you want to live a culture-full life, where cultural workers are duly remunerated and included in democratic debates?✅ Do you agree that the EU Member States should devote at least 2% of their National Resilience and Recovery Plans (NRRPs) to culture?Support the #CulturalDealEU now by endorsing it! 👇cultureactioneurope.org/projects/culturaldealeu-campaign/support-culturaldealeu/ ... See MoreSee Less

Are you in need of some inspiration or would you like to exchange ideas about recreating tourism with other tourism professionals? Join us for a free online IE tourism initiative ‘Open doors’ session at the IE conference, on Monday 4 October, at 14.00 CEST.Get more information here 👇https://www.interpreteuropeconference.net/ie-tourism-initiative-recreating-tourism-through-heritage-interpretation-open-doors/#iecon21 #ieinitiative #RecreatingTourism #TourismInitiative ... See MoreSee Less