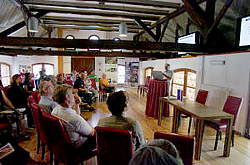 In 1999, an international workshop, ‘Heritage presentation and interpretation in Europe’, was held at Bournemouth University (UK). 80 participants from 14 different countries agreed that an international network would be desirable in Europe.

On 14 October 2000, ‘Interpret Europe – European Network for Heritage Interpretation’ was launched in Hasel (Germany) to work towards the establishment of an association.

During the following years, a steering group and a secretariat were installed, a website was created, several bulletins were published, and seminars were held in Bratislava (Slovakia) and in Göttingen (Germany). However, attempts to acquire financial support for managing Interpret Europe failed and activities were reduced.

In 2007, during the conference ‘The Vital Spark’ in Aviemore (UK), attendees re-stated the need to found a pan-European association.

In 2009, NAI, the National Association for Interpretation (USA), organised an international conference in Athens (Greece). A new initiative group was formed among European attendees and prepared the foundation of Interpret Europe as an association.

On 14 July 2010, the foundation assembly of Interpret Europe as the ‘European Association for Heritage Interpretation’ took place in Cerklje na Gorenjskem (Slovenia) with 27 participants from ten different countries signing the Constitution.

About Interpret Europe
Our history
Our vision
Our goals
Our fees