Berezinsky Reserve is becoming an area of interpretation! 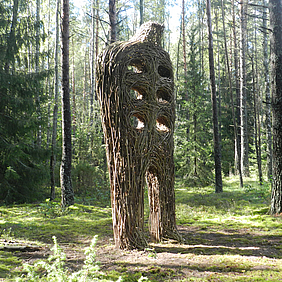 ‘In the County of Myths’, an unusual ecological trail, has been created in the Beresinsky Reserve in Belarus. It explains natural heritage and promotes sustainable nature management using Belarusian mythology.

The Beresinsky Biosphere Reserve is the oldest and the only natural area of protection of the highest rank in Belarus. It is located some 100 km north-east of Minsk on the edge of the watersheds between the Black and the Baltic Seas. It extends to 11,000 hectares and is a patchwork of boreal, coniferous and broad-leafed forests, lakes, watercourses, marshlands and flood plains. It also has one of the largest un-drained peat bogs in Eastern Europe.

Belarus has a rich archaic traditional and mythological culture. Mythological characters regulated human activity in nature and determined responsible relationships with the environment, promoting sustainable norms in nature resource usage. Our ancestors learned a sort of knowledge about the environment through mythology. We can use this, actively and creatively, to explain our natural heritage and to promote sustainable nature management. Within an EU/UNDP project, we are now creating the Museum of Mythology and the trail ‘In the Country of Myths’ in order to achieve these goals. The trail will show our nature from a new angle – through mythological characters that live in the forest and protect it. According to our ancestor’s beliefs, these characters could be kind or dangerous to people depending on how those people behaved. They played a role of guardian spirits of trees, bogs, rivers, plants, etc.

Different mythological characters on the trail were created during a ‘Plein Air’ (outdoor workshop session) in August by famous artists from the Belarusian Union of Designers. The main idea was to tell stories about nature and ecology through the use of the mythical creatures’ images. This idea aroused great interest and a lot of positive feedback. During the ‘Plein Air’, artists met with experts in the field of mythology, spoke with locals, and spent ten days in the forest. They used different materials for their artworks: wood, stones, glass, grass, scrap-metal, etc. In the end, 17 artworks were completed.

For example, Lesavik (a wood goblin), is a mythological forest lord. People believed that each forest had its owner, who looked after all the animals and birds. It saved them from the fire, hunters, etc.
Lesavik can change his appearance, so it is hard to say how he really looks. He can be a stump or tussock, beast or bird, or even a plant, but most often he looks like an old man with a long beard. Lesavik watches to see if people follow the rules in the forest, otherwise he scares them with screams. The artwork was created by Pavel Voinitsky.

Other artworks include ‘Vuzhyny Karl’, the mythical keeper of all snakes (by Elena Chepeleva).  ‘Rusalka’ is a sculpture of a mermaid (by Tatsiana Gomza), who looks like a beautiful young girl and usually appears in the field, forest, or near water. ‘Hata Kladnika’, who is the keeper of the treasure house (by Alena Atrashkevich), and owns treasures and protects his enormous wealth; but whose greed made him evil and forced him to live in poverty.

We are currently working on the design of an interpretive walk along this trail and we are running courses for young actors – local children who, it is hoped, will participate as animators on the interpretive walk.

It is planned that the trail ‘In the County of Myths’ will be to be presented to the public in November.

Dr. Valeria Klitsounova is Chair of the Board of NGO ‘Country Escape’, Associate Professor of Belarusian State University. She is an author of the very first book on interpretation in Russian. You can get in touch with her at l[email protected].

Darya Pukas graduated as a student from the Belarusian State University and is an active volunteer in heritage interpretation promotion in Belarus. You can get in touch with her at [email protected].

To cite this article:
Klitsounova, V. and Pukas, D. (2016) ‘Berezinsky Reserve is becoming an area of interpretation!’. In Interpret Europe Newsletter 3-2016, 11