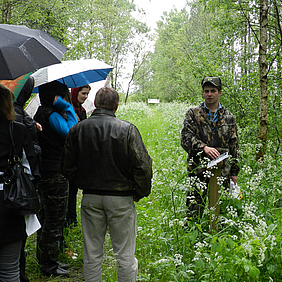 Greenways act as a catalyst for promoting sustainable development, the conservation of resources and provide economic benefits for rural communities through increasing livelihood chances (European Commission, 2003; Mac Nulty P., 2004).
The definition for the ‘Greenway’ concept largely remains internationally undefined. Originally, the ‘Greenway’ was a term coined by urban designers and landscape architects for ‘green’ connections between parks within the urban and peri-urban fringes of cities. The concept has since developed widely by name and type.
The concept started spreading at the end of 1980s/beginning of 1990 when the European Greenways Association was formed. The association now unites 35 members comprising of national organisations and associations dealing with the development and promotion of greenways. The most active are organisations from Belgium, Spain, France, Ireland and the Czech Republic.
In Central and Eastern Europe (CEE) there is an existing network of greenways developed across Poland, Czech Republic, Slovakia, Hungary and Romania. The ‘Central and Eastern European Greenways’ Program (CEG)  (http://www.environmentalpartnership.org/regionalceg/), supported by the association Environmental Partnership for Sustainable development, unites the CEE countries.  The CEG network currently includes eight long-distance greenways and a dozen or more local trails – over 8,000km of eco-trails – that attract substantial numbers of tourists.
The Belarusian Association ‘Country Escape’ within the framework of CEG joined the European Greenways Association in 2006. Membership in this body allows organisations to promote their national greenways within Europe and provides an opportunity to access information and experiences from Western European countries.
Within the context of Belarus, greenways are understood to be heritage trails leading along green corridors – rivers, historic trade routes, natural corridors – managed together with local people to protect their ecological function. Greanways aim to bring tourism and recreational activities and promote healthy lifestyles by non-motorised means of transport (Klitsounova V., 2009).
Each greenway has its own identification system, including a name and logo. The name and logo of the greenways is shown on the information signs, panels, maps, guidebooks and other publications.
Every greenway project has five necessary elements:

The concept of greenways is becoming more and more popular in Belarus. It is based on an integrated approach and presents cultural and natural heritage as a whole phenomenon. This approach is very important for European countries where cultural landscapes dominate.

One of good examples of greenway development is ‘Volozhinskiye Gostincy’ (Volozhin Roads). The Volozhin region has rich natural heritage (the largest forest in Europe – Nalibokskaya puscha protected area), great history and outstanding cultural (mostly intangible) heritage.  We helped locals to create tourism products based on the whole heritage of the region.
For example, tourists who visit the eco-trail in Naliboky forest, discover unique biodiversity; and experience the partisans’ movement. Tourists hear stories about the old Radzivil’s glass factory and can visit glass craft shops where unique Radzivil technology has been restored. They can also visit an old traditional homestay which has been built by forester of Tyshkevich Duke. His son lives in the homestay and organises interesting trips on horseback for young people – ‘Following Partisans’ Trail’. His wife also cooks traditional recipes using products from the forest (intangible heritage).  This experiential approach is used everywhere along on this greenway.

Dr. Valeria Klitsounova is the IE Country Coordinator for Belarus. She is Chair of the Board of the NGO ‘Country Escape’, and Associate Professor of the Belarusian State University. She is an author of the very first book on interpretation in Russian. She can be contacted at: lera.greenbelarus@gmail.com

To cite this article:
Valeria Klitsounova (2017) ‘Greenways in Belarus’. In Interpret Europe Newsletter 1-2017, 18