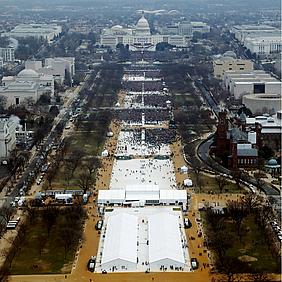 Populism is not just a lighter form of right-wing ideology. It’s an assault against the pillars of Western civilization, the human perception of reality and human reason. Its rise poses questions to interpretation

It was an iconic moment: the just inaugurated Trump administration denied the obvious. The new White House Speaker, Sean Spicer stated that the audience attending Trump’s inauguration ‘was the largest audience ever to witness an inauguration. Period.’ Defying photo and video evidence that had already gone viral.

One day later, the Counsellor to the US President, Kellyanne Conway, called Spicer’s false statement ‘alternative facts’ thus twisting the meaning of ‘fact’ towards that of  ‘opinion’.

Both caused shock waves in the media and arguably among most heritage interpreters. Populism threatens the cornerstones of interpretation: respect for the factual reality based on empirical evidence and language based on shared concepts.

Why did the populists act like that immediately after their arrival in the White House?  Was it a lack of professionalism? Or was it a deliberate demonstration of power: we can determine what is real, even if we contradict what people can perceive with their senses. Period.

This might sound strange. But Trumpian – or Johnsonian – populism is obviously based on something more powerful than factual reality and coherent reasoning. In August 2016 when hardly anybody expected Trump to win the elections, his chief strategist Steve Bannon gave hints: "Darkness is good. Dick Cheney. Darth Vader. Satan. That’s power. It only helps us when they get it wrong. When they’re blind to who we are and what we’re doing."

But what kind of power is it, which ‘the establishment’ of ‘mainstream media’, civil society groups and professional politicians cannot see? Georg Seeßlen pointed out that the Trump team cannot be understood within the logic of political discourses. They and their supporters follow fundamentally different paradigms, those of popular culture. Most films, casting shows, soap operas are not about what is real, but what the audience wants. Logic and experience, the decisive criteria of rational discourse, are not so relevant. What counts in popular mass culture – also in advertisement industry and social media – is effect and emotion. Excitement overrules reflection. Entertainment trumps truth.

The darkness which won the White House is a powerful assault against the foundations of experience-based, rational, Western thinking on which heritage interpretation is founded.

But we must ask ourselves unsettling questions. Are we so different from populism when we popularise the scholars’ findings? Emotions, provocation, entertainment, excitement, customer orientation, all these are familiar concepts for interpreters, too.

Populist leaders might well embrace NAI’s definition of interpretation as a ‘mission-based communication process that forges emotional and intellectual connections between the interests of the audience and meanings inherent in the resource’. Just imagine Steve Bannon writing a new mission statement for the National Park Service which would require interpreters to base their work on the agenda of contra-Enlightenment populism. As one of his very first actions in office, Trump pressured the National Park Service director to provide other photos that ‘prove’ the unreal (see Washington Post).

But isn’t reality a matter of perspective? Aren’t meanings subjective and flexible?
The populist movement demands us interpreters to think more carefully and more precisely about the philosophies which underlie our own discipline (for a start c.f. Lehnes & Carter, 2016).

Patrick Lehnes researches the philosophical foundations of heritage interpretation at the University of Freiburg, Germany. He also works as a freelance interpretive planner and author (www.lehnes.info). Patrick initiated the founding of Interpret Europe and served as its Executive Director from 2010 to 2015. He can be contacted at: patrick@lehnes.info