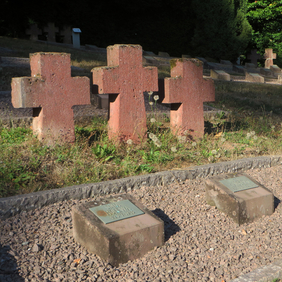 Usually, strolling through the oak forests in the very heart of Germany is a real pleasure; romantic landscapes with hills and creeks, hidden villages and old castles. Nobody would expect any darker stories than those of Snow White or Cinderella, which the Brothers Grimm collected in these villages about 200 years ago.

One of these enchanting sites is Ludwigstein Castle. However, from the castle’s gate, it is just about 15 kilometres to Friedland – the largest refugee camp in the years after the Second World War, it is two kilometres to the former Iron Curtain where the World was divided into East and West, and it is just 500 metres to Ludwigstein War Cemetery.

Harbouring 294 individuals from the Second World War, the cemetery is rather small; but it is remarkable considering the idea to learn from war for peace. There lies a 17-year old boy who was a soldier for just a few days, and two young men from a probation battalion who were shot, probably for desertion – and an SS man who was a Muslim enlisted in the Caucasus.

Many victims weren’t soldiers at all. One suffered as a prisoner in a concentration camp before he was killed during one of the death marches in the final days of the war; and a forced labourer from Russia died from intoxication shortly before she headed home after having been offered methylated spirits by her fellow sufferers to celebrate her liberation.

Ludwigstein Castle gives all these stories an anchorage. Built in 1415, it tumbled down in the 19th century and was resurrected by youth groups about 100 years ago; as the cemetery itself had been built by youth groups together with American, Belgian and German soldiers. The castle houses a youth hostel, the State Archive of the German Youth Movement and a youth learning centre, which organises educational activities.

To tell the stories of the people from the cemetery, the centre developed a geocaching programme. School classes especially can search for original objects or their replica, deposited in the forests nearby the site. Most of these objects belonged to the victims. Striving through the forests, the groups face tasks which they can only solve by consulting each group member.

All tours start at the castle, and all tours end at the cemetery. Although this programme is not at all about knights and fairy tales, it is one of the most popular programmes the centre provides. In the beginning, students are mainly attracted by the technological challenges of their GPS; but at the end, often the focus has radically shifted.

The programme was created jointly with the Volksbund Deutsche KriegsgräberfÃ¼rsorge, an organisation in charge of more than 800 war cemeteries with learning centres in Belgium, France, the Netherlands and Germany. It is seen as a good example for learning about war on site; but the most critical prerequisite is the site itself, arranged in a way that obviously provokes thinking.

Ludwigstein War Cemetery is a peaceful place to rest, just like a little landscape park. It doesn’t provide a classic story about war heroes, but rather raises questions around war and peace, and about the challenges individuals face if their leaders play with fire. Wouldn’t it be great if more war cemeteries could be like this?

Thorsten Ludwig is the owner of Bildungswerk interpretation, a consultancy founded in 1993, dedicated to interpretive training and planning. He has been Managing Director of Interpret Europe since 2015. You can get in touch with him at: [email protected].