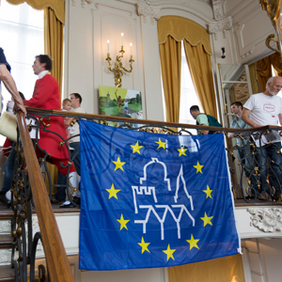 It is a beautiful coincidence: Open Monument Day celebrates its 30th anniversary this year and 2018 has been declared as the European Year of Cultural Heritage.

In 1989 the first Open Monument Day took place in Flanders. Other European countries preceded us. The theme of the first edition was: ‘Experiencing Monuments’. Thirty years on, the event still enjoys the same solid foundation, although it has obviously evolved over time and according to developments in the sector. However, the basic idea – offering free visits to heritage sites across Flanders at agreed times, making sure visitor experiences are of the highest quality and, due to the number of visitors, strengthening the impact of these heritage sites within society – has remained unchanged.

In 1975, many years before the first Open Monument Day in Flanders, the European Year of Architectural Heritage was organised. This event became the influential beginning of many developments within our sector. Within that tradition, the European Year of Cultural Heritage takes place in 2018 – a European project. The EU takes its own initiatives to emphasise the great importance of heritage by, for example, providing the very valuable and encouraging report: Cultural Heritage Counts for Europe, but the success of the year primarily depends on the heritage subjects themselves, who also have a vested interest in this. The Year provides an opportunity to more prominently and sustainably place heritage at the top of the European agenda. (The Statement of Bruges in 2010, at the end of the Belgian EU Presidency, marked the beginning of the preparations of the European Year.)

It is no surprise that this year, in Flanders and elsewhere, we are focusing our offering on Europe. This subject is in fact very broad, and we want to keep it that way. Therefore, we published a guide to provide a source of inspiration. We thought of thirty ideas that might inspire our local organisers to participate in the 30th Open Monument Day. There are undoubtedly dozens of other ideas to add, but we wanted to leave our local organisers enough space to plan their own events and activities.

We hope that this guide provided inspiration to our local organisers so that we can once again present the visitors of Open Monument Day on the 9th of September a very interesting European programme. Enjoy!

Tom Dorau studied art history and archaeology before he started his career as project coordinator of the Flemish Open Monument Day in 2001. After working as project manager and educational publisher for more than ten years, he returned to his first job in 2017.