Finding the fish in the Cadger’s Pad 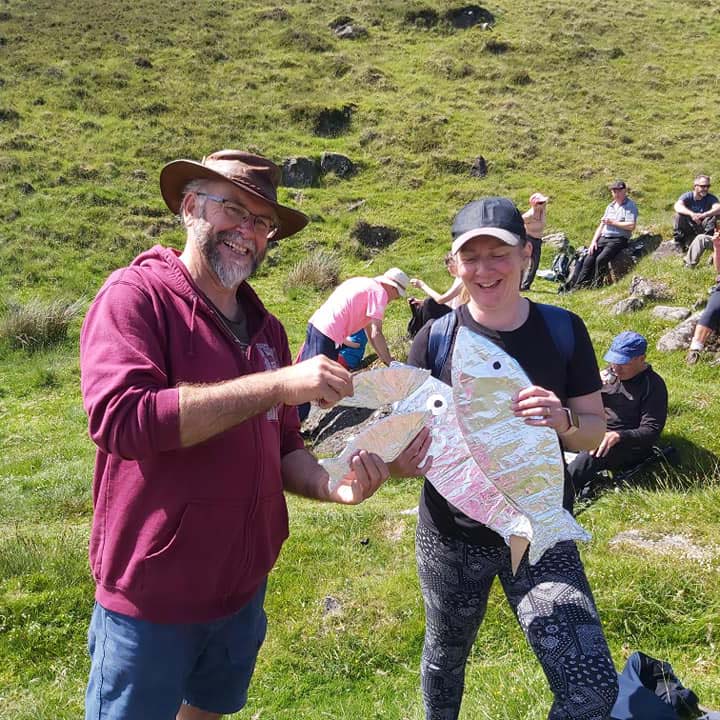 Documenting Irish place names and re-discovering ancient practices through storytelling to uncover a sense of place.

On a sunny Saturday in June 2021, over 100 people gathered to climb an ancient pathway in the Cooley Mountains of County Louth, Ireland, as part of an event organised by Carlingford Lough Heritage Trust. They were armed with cut-outs of silver fish, pipes, fiddles and a couple of bottles of unmentionable provenance! They were followed by low flying drones.

This was part of an event to retell the stories of over 250 minor Gaelic place names mapped in a report published in 2015. The report is relatively well known in academic circles but few local people, even those who regularly use the mountains as farmers or hillwalkers, know of its existence or cultural significance. This project, funded by the Heritage Council of Ireland, aimed to make it more familiar within the area and beyond by using the medium of video and the art and technique of traditional storytelling.

In the list of placenames, we identified a number that were linked to powerful local narratives:

The event on the sunny hills above Omeath retold the story of the Cadger’s Pad.

The Cadger’s Pad is a green path on a green mountainside and very difficult to film, hence the call out to local people to climb in a line along the route so that the drone could see where the trail went. This was a very odd conga party line! The silver foil fish were carried to represent the 13kg of herring that the herring girls (cadgers) of Omeath carried in creels on their backs as they walked 10 miles to the Dundalk markets. The reflective fish were also designed to show up well on the drone footage. When the walkers arrived at the top, we stopped to play music, sing and dance at the Devil’s stone – a flat rock where the girls traditionally rested to play cards, until one day, the Devil appeared to them and forbade them from gambling there. Stories were told, music echoed the hills, little girls danced, and friendships were rekindled after long Covid-enforced separations.

The film documenting the event was launched on 24 September. It starts with an interview with the archaeologist who led the original report work explaining the social significance of the place names in the context of life in the mountains. A Gaelic scholar then provides background on the Oriel dialect and its unique features and the decline of the Omeath Gaeltacht. Still, the most meaningful part of the film is the footage of local people celebrating their individual places in those special places. You can watch it here: https://www.youtube.com/watch?v=fLf6VCWqGtQ

Abby McSherry works for Newry, Mourne and Downe District Council, Ireland, where she is the communication and outreach officer for the CANN Project (www.theCANNproject.org). She can be contacted at: abby.mcsherry@nmandd.org.