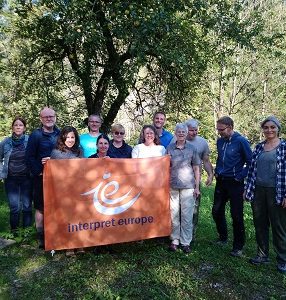 IE’s Strategic Plan 2016-2020 just ended. A review of the achievements in that period is being used to help plan our next five years.

IE’s Strategic Plan 2021-2025 is currently being developed by the Supervisory Committee and Management with support from the managing coordinators and input from members at certain stages. Maybe you took part in the SWOT analysis session to help assess the organisation’s Strengths, Weaknesses, Opportunities and Threats? These results are feeding into the planning process and we thought it would be good to share a summary of the 2016-2020 review report.

Review of activities
From 2016 to 2020, IE grew its membership to five times its size. In 2015, most members knew each other as heritage interpretation specialists, and although conferences were small, the share of those members who met there every year in person was significant. The work was mainly done by the directors backed by the Supervisory Committee.

By the end of 2020, 117 members were actively engaged in 29 IE teams, and there are many more ways to contribute and to benefit from IE than joining a conference. Most new members now join for participating in an IE training course.
IE has grown much bigger and has many more active members, but on the other hand the average commitment and connectedness of all members are lower than five years before. IE changed much more during the period 2016-2020 than during the period 2011-2015.
IE’s 2016-2020 strategy had been based on an analysis of two internal and two external areas. On the internal side, its previous achievements and membership development, on the external side its surrounding stakeholders and general trends in Europe were analysed. The latter was examined through a STEP analysis, reviewing social, technological, economic and political developments.
Findings suggested that search for purpose was the most critical trend to which IE should refer by addressing all those who intend to give natural and cultural heritage deeper meaning. As a result, IE opened more to the wider public while in 2011-2015 it had mainly been focused on fostering the community of professing heritage interpreters and debating shared standards.

Another focus resulting from the STEP analysis was search for authenticity. While people receive more and more information through screens and entertaining stories became almost mainstream, first-hand experience was defined as a unique selling point and a characteristic way to make heritage more meaningful to people and people more mindful towards their role in shaping our shared future.
Further developing those thoughts in exchange with members and other stakeholders emphasised the conclusion that the future interpreter should more be seen as facilitator encouraging and supporting people to interpret responsibly on their own, and to get into an exchange about their varying points of view. This was different from looking at interpretation more as mission-based one-way communication, revealing what was meant to be inherent in ‘the resource’, as it had been mainstream in the interpretive community during previous years.
Since 2016, IE used its training programme to introduce, discuss and test the qualities of its modified paradigm, as it now used its annual conferences to invite leaders from other European stakeholder organisations as keynote speakers to foster strategic alliances. IE joined the European Heritage Alliance and triggered debates about the idea of empowering people to interpret heritage in order to reflect upon human values and future perspectives. All of this received more perception and political relevance during IE’s 2016 conference, ‘Heritage interpretation for the future of Europe’, and against the background of debates around populism, mainly triggered by the Brexit and Trump campaigns.

The development continued in 2017 in preparation for the European Year for Cultural Heritage. IE’s initiative, ‘Engaging citizens with Europe’s cultural heritage’, resulted from workshops for the European Commission and the Council of Europe. The report was awarded the Altiero Spinelli Prize by the EU, which significantly fostered IE’s reputation at European level.
In 2018, during the European Year of Cultural Heritage, IE benchmarked in the heritage and interpretation communities, joined more than 30 international meetings, was an active member of the European Commission’s Stakeholder Committee (and later of the permanent Expert Group on Cultural Heritage) and won the EU Commissioner for Education and Culture to open its conference.
Since 2019, UNESCO’s Regional Bureau for Europe showed interest in what it called ‘value-based heritage interpretation’, including subjects such as community involvement and sustainable thinking, and UNESCO’s quality criteria for learning became part of IE’s training programme.

Especially during the years 2016 to 2019, IE made some progress regarding its 2030 vision that, “heritage interpretation will be established as the generally-accepted and professional approach to creating public understanding and appreciation of natural and cultural heritage throughout Europe”.
At a global level, IE joined the Global Alliance for Heritage Interpretation and the Climate Heritage Network but it also became clear that IE’s perception as a benchmarking organisation was not in accordance with its actual capabilities and capacities. IE was still not able to pay its Management.

From 2016 to 2020, considerable progress was made regarding IE’s purpose “to enhance heritage interpretation as part of public education” and to “conduct educational and training activities” (Constitution, §2). In 2015, it was decided that increasing IE’s membership numbers was critical to secure a constant and independent long-term income from membership fees, and IE’s own training programme became one key lever to achieve this.

From 2016 to 2020, 41 IE trainers were certified and encouraged to develop the programme. They ran 124 training courses in 22 countries with more than 1,200 participants. 74% of IE’s new members joined through IE training events, and by the end of 2020, more than 60% of IE’s membership had been certified after participating in at least one 40-hour training course. Through 70 in-person introductory events, trainers actively promoted IE and since 2018, they also ran most of the webinars of that newly launched programme (from September 2019 on a monthly basis).

For more comprehensive information provision to all members, the quarterly newsletter was significantly extended. The average issue grew from 12 pages in 2011-2015 to 35 pages in 2016-2020, and since 2016 it has also been offered as an electronic version. Additional newsmails were introduced for short-term information, regular surveys were launched, and IE became active on several social media channels, including Facebook, Linkedin, Twitter, YouTube and Wikipedia.

Besides ‘Engaging citizens with Europe’s cultural heritage’, IE launched two more initiatives: the regional initiative ‘Fostering communities through heritage interpretation’ in the Western Balkan region and the subject-related initiative ‘Recreating tourism through heritage interpretation’ that will unfold as our focus after the coronavirus crisis and become the subject of our iecon21 conference in October. As an associated partner, IE was also involved in the EU projects HIMIS and DELPHI.

There have also been some challenges during this period, not least the impact last year of the global pandemic, and according to the key strategic goals planned for 2016-2020, IE was not able to:

IE achieved a lot but there is still a lot to do to fulfil that vision of a vibrant network we all appreciate. This also depends on you, the members. From taking responsibility as a coordinator or joining a team, through running a webinar or writing a newsletter article to posting in our Facebook group or just getting in touch with a member you haven’t seen for a while. There are so many opportunities to be active, and each is one more reason for looking forward to the next future of IE. We hope that you have been inspired as a member to take part in the strategic planning process when asked by the Supervisory Committee – it is, after all, YOUR membership organisation. We are looking forward to the next five years of IE and what we can all achieve together.