Creating own apps for museums and heritage sites 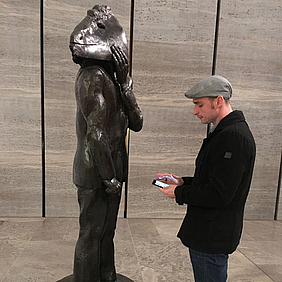 Did you ever want to create an own app for your heritage site but feel that this was far beyond your budget? Because this is too often the case, we thought about a solution.

As a former service provider for developing mobile applications for different cultural institutions in Germany, we discovered a big gap between the theoretical requirements of museums and other heritage sites for adequate digital mobile solutions and the possibilities in the real world. This gap is mainly caused by the high costs of developing useful mobile applications on the one side and the available budgets on the other side, especially for small museums.

In Germany there are about 6,000 museums of different sizes. But only a few of them can accomplish mobile application projects. The same situation prevails in other countries. We realised that there was a certain blueprint behind every request.

So we analysed the requirements and planned to improve this constellation by developing an easy-to-use software based upon these requirements.

With this software – or building kit – museums, cultural institutions and natural and cultural heritage sites should be able to create apps themselves without the need for expensive agencies or programmers. We worked for over one year and came up with our solution called KULDIG, which stands for Kultur Digital – a German-English hybrid.

The institutions can initially define the basic aspects of the app, like audio guide or multimedia guide, target platform (Android and/or iOS) and so on. Afterwards, they select from different modules, e.g. map, list, qr-code scanner or information about the museum. Finally, the user adds content, like text, images, documents or audio and video sequences. The last step is to simply click a button and our software builds and distributes the finished app to the previously defined app stores. It is also possible to use the app in-house with its own hardware. For this case we also offer cost-effective devices with special launchers based upon Android and iOS to institutions if it is needed.

Since KULDIG works like a so-called content management system (CMS), the user can revise and update the content as often as necessary or desired. It is also possible to add or remove certain elements, like venues or exhibits, at any time. These changes don’t need any update via app stores and they can be made available to users immediately. Other more profound changes, like adding more languages to the app, do need to be distributed through the app store, but they are less frequently required and are still easy to handle.

So far, we have reached our aim to build a solution for closing the above-mentioned gap and offer museums and other institutions the opportunity to create apps independently at a low cost level.

The official launch of KULDIG will take place in January 2017 with the possibility for 50 museums or cultural institutions to use our software free of charge for one year. But there is no time for rest; we want to go further with KULDIG. So we will add our own indoor navigation solution in the first half of 2017. Furthermore, we plan to integrate augmented reality and other sophisticated technologies as modules which the user can choose from.

Dennis Willkommen studied Ancient History, Latin and Sports management in Leipzig. He has been in the web and app business since 2011, is founder and CEO of DroidSolutions with its product KULDIG (www.kuldig.de) and has also worked since 2013 as a lecturer for mobile marketing and app development. He can be contacted at: [email protected]