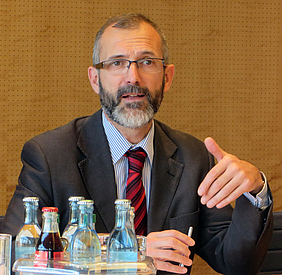 The current work of the Alliance is focused on the 2018 European Year of Cultural Heritage (EYCH). Suggested by Commissioner Tibor Navracsics in April, the European Commission proposed the EYCH in August to the European Parliament and to the EU Council, while the Alliance now echoes this request. As pointed out at our 2016 conference, the EYCH is just the latest step underlining the significance of heritage for the future of Europe. However, since June the subject has become more urgent. President Jean-Claude Juncker stated that, ‘the next twelve months are decisive if we want to reunite our Union’, while Commissioner Navracsics said, ‘Our cultural heritage is more than the memory of our past; it is the key to our future’.

If cultural heritage is seen at the very heart of Europe, the question is how it can become more relevant to European citizens. Interpretation gets people not only in direct touch with heritage but also encourages them to search for meanings behind it. This is why Commissioner Navracsics acknowledged interpretation as an important approach towards a more inclusive society. IE already considered these subjects during its 2015 conference, ‘Sensitive Heritage – Sensitive Interpretation’, which started at the gate of the Auschwitz concentration camp. The values the European project is based upon were discussed again at our 2016 conference, ‘Heritage interpretation – for the future of Europe’, starting at Flanders Fields. Participants experienced first-hand at sites from where European values evolved (from devastating or from more pleasurable incidents) that interpretation can indeed play a key role regarding several subjects on top of the European agenda, such as human rights, community building, sustainability or peace.

IE itself could mirror these values at different levels. For example, participation can be seen as a quality criteria considering the way our actual interpretive work is done; but it can also be taken into account when we develop our inner structures at IE; and it can be regarded in our collaboration with external stakeholders in order to support the ideas behind the European project.

Of course, IE cannot (and should not) deal with this at a European level on its own – and this is where the European Heritage Alliance comes in. Members of the Alliance represent a broad field of competences and already shared their view that one key focus of the EYCH could be on interpretation. Of course, IE would like to meet this challenge but we need to be aware that this includes some work to be done by IE in the years to come.

For more information about the European Heritage Alliance 3.3 go to:
http://europeanheritagealliance.eu/

For more information about the 2018 European Year for Cultural Heritage go to: http://ec.europa.eu/culture/news/20160830-commission-proposal-cultural-heritage-2018_en

IE’s Managing Directors are Thorsten Ludwig and Sebastian Zoepp from Germany. Thorsten runs Bildungswerk Interpretation, providing interpretive training, planning and consulting since 1993. You can get in touch with him at: [email protected]. Sebastian runs Spreescouts and Spree Academy in the Spreewald Biosphere Reserve south-east of Berlin. You can contact him at: [email protected].