Learning by exploring on the Capercaillie Trail 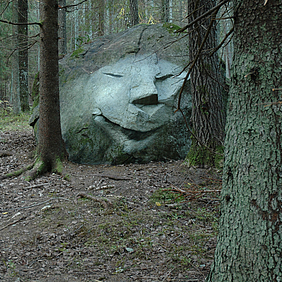 The Capercaillie Trail is an adventure trail for children to explore and learn about nature through activity. A fun alternative to reading signs about all the species living around.

The target audience for this adventure trail is kids and youngsters aged 9-12, but younger kids just love it as well. It has been used since 2013 and many children have returned again and again, to try the cliff or the hanging ropes, to say ‘Hello’ to the smiling stone, and to collect the letters along the trail or to try the quiz.
Along the Capercaillie Trail, you will meet many of the inhabitants of this forest, both real and mythological! Of course, the capercaillie itself is represented by a black colored male with the tail spread-out, and a beautifully camouflaged female. Both models are big enough to mount and ride as if they were hobby-horses. Nearby is an innovative audio interpretation unit, a so- called ‘U-turn’. When this device is wound up, the peculiar sounds of the capercaillie male can be heard. One of the other tracks of the U-turn lets you hear the mythological sounds of trolls, muttering and arguing. They are said to be able to take the form of a stone or a stump, so one of them might be watching you right there…
The strength of this trail is that it has something to offer visitors of any age and interest. The youngest guests are happy simply to walk the adventurous path through the trees and rocks, following the tracks of the wild animals (e.g. wild boar and roe deer). The ones that have started reading may collect letters along the trail, that in the end form a secret code word. The code word gives access to a diploma which is solemnly handed out in the nearby Visitors Centre, ‘Naturum Swedish National Parks Information Centre’ (there is a shorter name in Swedish). The slightly older kids may try the quiz, available from a letter box at the start of the trail. On eleven sites, a numbered pole points out which question to answer, and three alternative answers give a good clue as to which is the correct answer. Two alternatives are often more or less crazy and obviously wrong. A child (or even an adult) should learn something even with little or no knowledge to start with. This positive result encourages children to continue.
The cost of this trail was around 100,000 Euro, including the materials, prefabricated climbing arrangements etc, and the security measurements being made. A lot of time was spent on this, but it was a creative and constructive work. The yearly cost of questionnaires, quiz folders, and pencils, is about 1,000 Euro.
At least 10,000 sets of quiz sheets and other resources have been used so far. Since each set is used by more people than the individual who is given them, this figure is an underestimate of the number of people using the trails, i.e. two sets of quizzes are often used by a family of four or a group of four or five students may use just one set of resources between them. This means that far more people have used the trail during its first three years than this 10,000 figure would indicate. We have the option to record user feedback through a short questionnaire which is filled in before the diploma is handed out. All of the responses are strongly positive about their experience. This is a valuable measurement of the public’s response. It will be possible to expand the trail when resources are available, and we can easily refresh it by changing the letters in the code word, and questions in the quiz. The Capercaillie Trail will therefore be able to fulfill its purpose for many years to come, that purpose being simply to encourage younger audiences to explore nature, and to realise that there is so much to see and learn more about.

Peder Curman is a biologist and experienced nature interpreter in Tyresta national park (www.tyresta.se), situated only 20 kilometers south of Stockholm City, Sweden. He meets dozens of school classes of all age categories every week during high season, and also previously worked as a teacher. You may reach him at [email protected].