IE in Admont: Interpreting the Alps in five languages 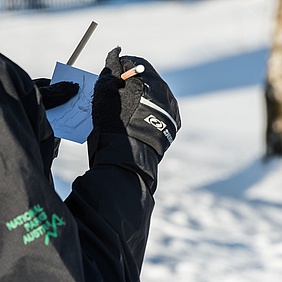 Heritage Interpretation is an excellent method of presenting the Alps to visitors – this was the message of IE workshops at the Danilo Re Memorial in the Gesaeuse National Park, Austria, on 27th January 2017

More than 150 participants from protected Alpine areas of Austria, France, Italy, Slovenia, Switzerland and Germany came to Admont. The team of the youngest of Austria’s National Parks, Gesaeuse, organised the 22nd Memorial of Danilo Re, who was an Italian ranger who died during his duties.

There were contests in different disciplines of alpine sports. But every memorial has a thematic part, too. In Admont this part focused on Heritage Interpretation, initiated by Markus Blank, who is responsible for Interpretation at the NP Gesaeuse. The Memorial was a really good opportunity to introduce and push Heritage Interpretation in the Alpine regions. Valya Stergioti and the IE Training Team had well prepared this part of the event to give all participants the same chance to learn about interpretation.

After Thorsten’s presentation, the German speaking participants received a free copy of the first German edition of Freeman Tilden’s „Interpreting Our Heritage’. The translation and the free books were made possible by substantial financial support from the Republic of Austria and the European Union. The books arrived just in time for this event.

During the following workshops in German, French, Italian and Slovenian languages, all participants had the chance to experience how Heritage Interpretation can be applied in their daily work life. The exercises focused on the central role of meanings and the difference between facts and meaning in Heritage Interpretation.

Markus and his team had carefully chosen nice places in Admont for every group. My group and I were happy to go to the snow covered garden of the famous Monastery of Admont – it gave a beautiful frame for our exercises, together with a deep blue sky and the impressive panorama of the surrounding snowy Alpine mountains of Gesaeuse National Park.

Because participation at the workshops wasn’t obligatory, several participants preferred leisure time. Others were glad about that: „Because this means that the workshop will be more intensive for us’, they explained. For me, it was a pleasure to work with them!

In the evenings, everybody met at the Alpine Buffets. Every group offered delicious samples which were typical of their regions, such as special bread, cheese, ham, beer, juice, wine, cakes or cookies. IE had a booth, too, and Marjeta had brought special bread and ham from Slovenia.

Preparing and managing such an event was a large amount of work for the Gesaeuse National Park team. Everything went smoothly, and Markus Blank and his colleagues did a great job for the participants and for interpretation. Special thanks to him and the National Park team, and also to Thorsten and Valya!

Elisabeth Nuebel-Reidelbach is a biologist. She was one of the participants of IE’s first CIGT Summer Course in 2016. You can get in touch with her at [email protected]

To cite this article:
Elisabeth Nuebel-Reidelbach (2017) ‘IE in Admont: Interpreting the Alps in five languages’. In Interpret Europe Newsletter 1-2017, 7