IE Spring Event through the eyes of a new member 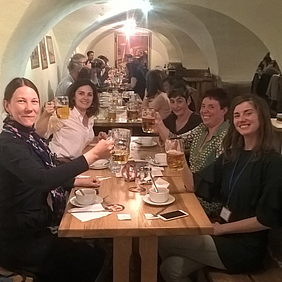 Silvija Jacić is a journalist and promotion manager from Zagreb, Croatia. After working as web editor and head of PR for adriatica.net, Croatiaâs first and largest online travel agency, she became a freelancer with a special interest in promoting interpreted heritage. She is a member of Interpret Croatia and also joined Interpret Europe in March 2017. She can be contacted at: silvija.jacic@promoandpress.com.

To cite this article:
Jacić, Silvia (2017) âIE Spring Event through the eyes of a new memberâ. In Interpret Europe Newsletter 2-2017, 6-8.
Available online:
www.interpret-europe.net/fileadmin/Documents/publications/Newsletters/ie-newsletter_2017-2_summer.pdf 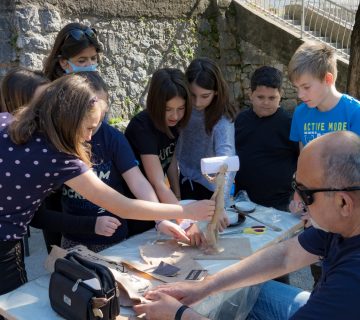 Recognition for the blind water carrier

In a new report “Stormy Times. Nature and humans – cultural courage for change”, 50 experts from 25 EU member states examined the role of culture for sustainable development. From this, they formulated 11 messages with the goal of rethinking the relationship between humans and nature for a liveable, sustainable future. One of them suggests: “Provoke [reflective] change in human behaviours and promote sustainable lifestyles”. Let’s use this line to spread the word about the methodology and tools that interpretation can offer to facilitate reflective change within the non-formal learning context.culture.ec.europa.eu/news/eu-experts-publish-proposals-to-harness-the-power-of-culture-for-sustai... ... See MoreSee Less

𝗔𝗿𝗲 𝘆𝗼𝘂 𝗼𝘂𝗿 𝗻𝗲𝘅𝘁 𝗪𝗲𝗯𝗶𝗻𝗮𝗿 𝗢𝗳𝗳𝗶𝗰𝗲𝗿?Can you inspire others and are you a good organiser? Then we would be happy towelcome you to our crew!As our Webinar Officer, you would:👉 recruit speakers and presenters (in cooperation with our Training Coordinator and othercolleagues)👉 develop an annual schedule for webinars at the beginning of each year (plan dates,presenters, titles and short introductory descriptions)👉 take care of technical procedures (organising a trial run with each presenter, organisingand chairing each session)We run one webinar per month. The estimated workload is five hours per month.What should be your driver is becoming part of our team in order to experience our community of dedicated members and to feel how IE gets better and stronger through you, day by day. Inaddition, you will not miss informative presentations and engaged discussions about interpretation theory and practice!If you can imagine supporting us in IE’s office, send us a motivation letter by 15 October at mail@interpret-europe.net. ... See MoreSee Less

2022 ENCATC Congress [encatccongress.org/] will take place in Antwerp and Brussels on 17-19 October. With a rich programme and lots of interesting speakers and debates, this year’s edition of the Congress is also a special one, as it marks the 30th anniversary of ENCATC📢 #EncatcCongress2022 is coming soon! Come take the pulse of #Europe’s cultural sector!🔍Focusing on #Internationalization, #Research and #CulturalExchanges will be looked at thoroughly from this perspective with more than 15 highly instructive conferences & sessions, over 3 densely packed days in 2 cities🗣 Professionals, scholars and renowned leaders will gather to discuss and network🕑17-19 October 2022, Antwerp & Brussels, Belgium 💡 ℹ️Don’t miss it, still not too late to register and know more about the event here 👉 bit.ly/3B8XYW3 ... See MoreSee Less

𝗪𝗲 𝗵𝗮𝘃𝗲 𝘀𝗼𝗺𝗲 𝗿𝗲𝗮𝗹𝗹𝘆 𝗲𝘅𝗰𝗶𝘁𝗶𝗻𝗴 𝗻𝗲𝘄𝘀 📣𝘁𝗼 𝘀𝗵𝗮𝗿𝗲 𝘄𝗶𝘁𝗵 𝘆𝗼𝘂!🥳 Our next IE Conference, 𝗖𝗿𝗲𝗮𝘁𝗶𝗻𝗴 𝗹𝗲𝗮𝗿𝗻𝗶𝗻𝗴 𝗹𝗮𝗻𝗱𝘀𝗰𝗮𝗽𝗲𝘀 𝘁𝗵𝗿𝗼𝘂𝗴𝗵 𝗵𝗲𝗿𝗶𝘁𝗮𝗴𝗲 𝗶𝗻𝘁𝗲𝗿𝗽𝗿𝗲𝘁𝗮𝘁𝗶𝗼𝗻, will take place on 12 to 15 May 2023 in Sighișoara, Romania. It’s not only our first chance to finally meet old friends and make new acquaintances face-to-face after the pandemic but also the chance to discover an exceptional location featuring several UNESCO world heritage sites which will provide a focus for discussions on new trends in interpretation.📌Don’t miss it! Save the date in your diaries now! ... See MoreSee Less