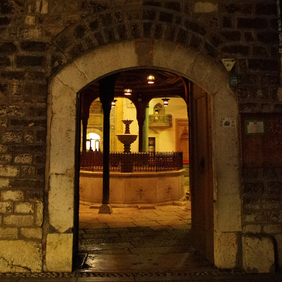 Where east meets west, where Orthodox and Roman-Catholic churches, as well as mosques and synagogues, were built within a few hundred square metres, diversity has been an asset. But it has also been a challenge for many centuries. Because of this, Sarajevo and the rest of Bosnia and Herzegovina have a particularly rich and diverse heritage with reflects many cultural influences. In hosting the Olympic games in 1984, Sarajevo brought the peoples of the world together.

However, diversity has shown itself to produce testing times: It was in Sarajevo, in 1914, that Franz Ferdinand, the heir to the multi-cultural Austro-Hungarian empire, was assassinated. This triggered the First World War. Years later, the capital city suffered from the longest siege of the 20th century during the Yugoslav Wars. Diversity had often been instrumental in unleashing divisiveness.

While Bosnia and Herzegovina are very rich in culture, the region also touches three distinct geological and climatic regions. It has, therefore, a particularly rich biodiversity too. Cultural landscapes shaped by human influence have added to this diversity. Some of it is threatened as farming intensifies in some parts while other, more remote, areas are abandoned. Not all natural heritage sites are easy to access. This, of course, is to the benefit of the wild animals in the large forests, home to 2,800 bears.

Interpret Europe conferences …
… regularly attract 150-200 attendees from up to 40 countries, all of whom share a dedication to support local people and visitors in their search for meaning in heritage. Besides seminal keynote speeches and study visits to remarkable heritage sites, IE conferences benefit from up to 80 presentations and interactive workshops delivered by their attendees.

At the IE conference, ‘Engaging with diversity’, we will explore the significance of EU’s ambitious motto ‘United in diversity’ in all its diverse meanings and implications. Cultural diversity can be a great asset that broadens horizons, facilitates creativity and thinking outside the box. But history is full of examples of diversity being framed in ways that reinforced stereotypes and fuelled hate.  Almost everywhere, a particular building or a species of animal can invoke very different feelings in different people because they may associate different meanings with them. This poses challenges to heritage interpreters and puts a high responsibility on their shoulders.

We also accept the submission of paper abstracts dealing with new developments in heritage interpretation theory and practice even if they are not directly related to the conference theme of ‘Engaging with diversity’.

Presentations can be 25 or 55 minutes long, including ten minutes for exchanges of views. We generally recommend keeping presentations as short and inspiring as possible. Workshops can be 55 or 85 minutes long and will always be characterised by the active involvement of all participants.

Conference proceedings will be published online on the day that the conference begins. They will include all full papers received by 1 May 2019. Delivering a full paper is not mandatory.

On our conference website you can find the submission form and abstract requirements for your proposal. Paper abstracts will be assessed by an independent review team. We need to receive your abstract by 1 March 2019.

Study visits …
… are an essential part of all Interpret Europe conferences. They offer a balance with indoor activities and allow for exchanges about interpretive practice. During the conference, we will visit the Bijambare caves, the stunning waterfall of Skakavac and the inspiring museums and galleries of Sarajevo. We will also visit churches, mosques and synagogues, remains of the Olympic games on Mount Trebevic and places where traditional crafts meet modern life. We will have the chance to walk on historical paths where history was made.