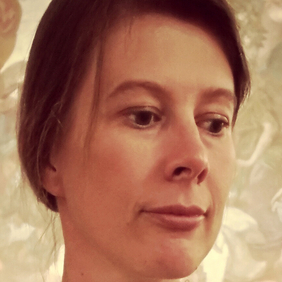 I am a museum educator. After I finished my master’s studies at the University of Pecs, in the Department of Classical Philology and the Department of Literature and Linguistics, I began working at the Department of Classical Antiquities in the Museum of Fine Arts Budapest. Later I did a course in drama in education and became a drama teacher. I came into contact with live interpretation in 2005 when I had the chance to go on a study tour of the UK. Soon after that, Past Pleasures (UK) delivered a course in live interpretation in Budapest which I took part in. Then, in 2008, I introduced live interpretation programmes to the Museum of Fine Arts. Given my training, I first developed Ancient Greek and Roman characters, but since then I have expanded these programmes to include other periods and collections of the museum.
Since 2015, I have been a student in the Doctoral School of Education at Eotvos Loránd University, Budapest. I plan to write my dissertation on how live interpretation sessions can change children’s attitudes to past people’s lives and ideas.
In 2018, I completed Interpret Europe’s Certified Live Interpreter Course.