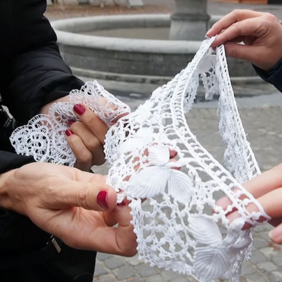 During this course, organised by the Slovenian Professional Guides Association and delivered by Janja Sivec (CIT) between 5-9 November, participants were introduced to two of the completely new tourist routes in Ljubljana: the Ljubljana Bee Path and the Ljubljana Lace Trails. The task for the course participants was to prepare interpretative tours for these two subjects, which are going to be offered as independent city tours starting in December 2018. These two interpretive tours will be suitable for everyone, including guests with special needs.

Why the Ljubljana Bee Path?
The beekeeping tradition in Ljubljana and its outskirts goes back to the time of the first prehistoric settlements. Over 4,500 beehives are active in the area of the City of Ljubljana, representing
3% of all Slovenian beekeepers. They are organised into four beekeeping societies. Urban beekeeping is now flourishing in Ljubljana with the culture and congress centre Cankarjev dom as a pioneer leading the way. Honey produced in the area  is of very high quality. In addition to beekeepers, the City of Ljubljana also takes care of bees by planting perennials with many honey plants among them.

The Bee Path was created to include all of the above topics and a lot of other content. It was designed in October 2015 and already  unit 35 members from educational and cultural institutions, health-care centres, economic entities and, of course, beekeepers and beekeeping societies. It is not just a path, it is a movement of like minded people caring for the well being of bees in the city with very diverse activities. That is why the  City of Ljubljana lined up new tourist products presenting natural and cultural heritage related to beekeeping in the city.

And – Ljubljana Lace Trails!
The Slovene capital Ljubljana is not yet widely known as a lace centre with a magnificent lace history. The first written mention of lace on Slovene land dates back to the second half of the 17th century and it comments on lacemaking and lace trading in Ljubljana, and on the use of lace among higher social classes. Johann Weichard Valvasor, a Slovene historian, polymath and member of the Royal Academy in London, stated in his book, The Glory of the Duchy of Carniola, published in 1689 that, ‘Many types of Dutch and Venetian lace are made in Ljubljana, they are sent to various countries, and they are distributed far and wide by special peddlers’.
In the 18th century, lacemaking spread to the suburbs, among the lower social classes. In that time, among all the cities in Carniola, Ljubljana had the highest number of lacemakers. Therefore, it is no coincidence that the first lacemaking school on Slovene ground was founded in Ljubljana, in 1762. Within a short period of four years, supposedly 200 bobbin lacemakers completed their training here. Sadly, it closed down in 1768. In spite of that it was very important, not only for lacemaking, but also as the first craft school for woman in Slovenia. And an interesting history of lace in Ljubljana continues to our modern time.

So, you are invited to come to Ljubljana and join one of the new interpretative tours with the city bees and/or with the beautiful Ljubljana lace!

As a participant of this course I found it surprisingly enjoyable and rewarding because I love the bees and the lace in general. At the beginning of the course it seemed a bit hard (i.e. stayed focused on interpretation theory, not just talking about the subject matter) but after all it became clear how to introduce these two subjects in an interpretative way. I can now add the new knowledge of interpretation to my every day guiding around my home town.

Dominika Koritnik Trepel is a tourist guide, founding member and secretary of the Slovenian Professional Guides Association. She lectures about the accessible, pilgrimage and apitourism during specially prepared courses for tourist guides. She can be contacted at: trepel@siol.net.

Cultural heritage as a catalyst for positive change

Join IE webinar:Heritage Interpretation for families: Why and what’s it all about?23 June 2021, 18:00 CESTDo you focus on families with the heritage interpretation you offer? Research in the Flanders region shows that the experiences we gain as a child when we’re out with our family determine what we are interested in later in life. So, if we want future generations to grow up into people with a heart for heritage, it is worth investing in the target group families. On top of that, Barbara Struys believes that heritage interpretation for families offers the visitors meaningful ways of connecting more with their family members and their shared heritage.Register here zoom.us/meeting/register/tJwscuGrqj0tGNHc_B4qJCvkk6MhUMADTWEqIllustration by Emma Thyssen ... See MoreSee Less

SHARE YOUR INSPIRING IDEAS WITH USWould you like to encourage other participants of Interpret Europe's online Conference to share and exchange their views on how interpretive approaches can help develop tourism, both in theory and in practice? Or, perhaps you’d like to share with us your idea or first-hand experience on how heritage interpretation benefits tourism, or community development at tourist destinations?This call for papers is your chance to play an active role at our conference in October, to attract some attention and inspire other conference-goers with your inspiring ideas, insights and experiences. Send us an outline of what you’d like to talk about here:www.interpreteuropeconference.net/format-of-presentations/Deadline for proposals: 1 July 2021📸 Image by Gerd Altmann from Pixabay ... See MoreSee Less

OurWorldHeritage June´s #2021debate theme: New Heritage Approaches, with 21 webinars featuring global perspectives on the future of heritage protection, conservation, and management, is in full swing. You can find recordings from past events and future events here 👇www.ourworldheritage.org/new_approaches/?utm_campaign=OurWorldHeritage%20Newsletter&utm_medium=email&utm_source=Revue%20newsletter ... See MoreSee Less

Join International Centre for the Interpretation and Presentation of WH lecture under the theme' Presentation: Delivering Multiple Values of World Heritage'. ➡17 June (Thursday) at 10:00 CET Maria Gravari-Barbas, the Director of the EIREST, will present and answer questions about “World Heritage and Tourism: looking for synergies,”.[Link for YouTube] youtu.be/d1W-3qSPFcA[Link for Facebook] fb.me/e/4r5At0d97If you are interested in the topic, we invite you to check out IE initiative Recreating tourism through heritage interpretation. interpret-europe.net/initiatives/recreating-tourism/ ... See MoreSee Less