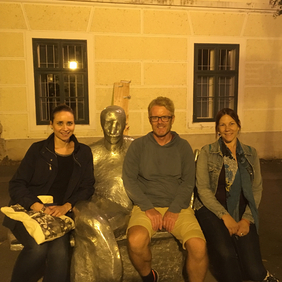 What’s your ultimate bucket-list challenge? As a geographer, mine was to cycle from Cabo da Roca in Portugal, the most westerly point of the European continent, to Istanbul, the gateway to Asia. Having completed that quest last summer, my next goal was to cross the Western Balkans, from Trieste to Athens; a 2,000 km tour of eight countries in three weeks.

Think about it. There are few places in Europe you can traverse so many countries by bike in so little time. I crossed eight riding from Vienna to Istanbul but Trieste to Athens equals that. Yet, most of all, the Balkans have always intrigued me, from those dusty atlases we all have featuring Yugoslavia, to the bloody break-up in the ’90s and the new face of the Western Balkan countries. Now I had the chance to finally see them at a human speed.

Coupled with these hankerings for the road, it hadn’t escaped me that Interpret Europe has a particularly strong network of active members in this region and so a plan hatched in my mind to bike through the Balkans combining some pedal-powered outreach networking.

So, first stop, and I found myself lunching in lycra with IE Management Assistant, Helena Vičič, near Ljubljana. Faultlessly polite and hiding her understandable shock when faced with a MAMIL (middle-aged man in lycra), we discussed the live interpretation course she was about to attend and some soon-to-be-revealed changes to IE’s training webpages.

On to Zagreb and a rendezvous with IE guide trainer and live interpreter, Iva Silla and IE Outreach team member and promotion and PR specialist, Silvija Jacić. Iva gave us a privileged gas-light guided tour of the old town, peeking into historic courtyards adjoining former coaching inns and fine mansions. The three of us exchanged thoughts over a craft beer (and Silvija’s favourite ice cream) about a key Outreach task of retaining new members and encouraging them to be active network partners. Subsequent ideas for a ‘follow-up’ communication campaign will be progressed this autumn.

I tied up all these leads and thoughts with Training Coordinator, Valya Stergioti, when I reached Greece and, with the boarding gate in sight, met Natural Heritage Coordinator, Athina Tsekoura, at Athens airport. Five friendly faces linked by pedal power wasn’t bad going!

But it wasn’t all business, thank goodness. I was lucky enough to visit a handful of museums on the road, including the outstanding War Childhood Museum in Sarajevo. It skilfully showcases powerful phenomena, donated by children of the war, accompanied by compelling 100-word texts that convey deeply attaching human stories. A first-rate example of heritage interpretation, it was one of the best museum experiences I can remember and I thoroughly recommend a visit if you go to Sarajevo. Another highlight was the remarkable Bay of Bones Museum on Lake Ohrid, a high-quality reconstruction of a Bronze and Iron-age pile-settlement sitting on the water. A lovely human insight from the exhibition sticks in my mind, an observation by Herodotus who noted that the lake inhabitants had the sense to tie string to their baby children’s feet to stop them rolling into the water! Both establishments would be valuable additions to our network and I’ll follow up initial contacts with more formal letters inviting them to join IE.

Now, I’m thinking about my next trip and visiting the expanding IE community. The EuroVelo Pilgrim’s Route and the Iron Curtain Route are looking good right now, but any suggestions will be gratefully received!

Sandy Colvine is an interpretive guide trainer and freelance translator. He is Interpret Europe’s Outreach Coordinator and a member of IE’s Training Team while also currently studying interpretation at the University of the Highlands and Islands, in Scotland, UK. He lives near Avignon in France and can be contacted at: [email protected].