A view of the world using heritage interpretation to navigate 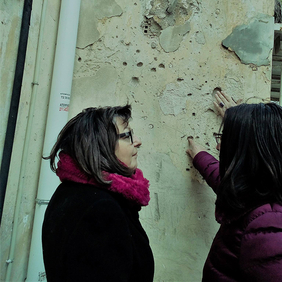 My lively interest in the Certified Interpretive Guide (CIG) course in Athens, delivered by Valya Stergioti, stems from the attractiveness of heritage interpretation on a professional basis and my deep and genuine love for the cultural and natural jewels of my country. This is a well-established, intensive and rigorous course with dense learning material and a tight schedule.

I really liked that shortly after the beginning of the course (Saturday), we stepped into the field so that we could understand hands-on what heritage interpretation is about, what a phenomenon is, how you bring it closer to the visitor and which stepping stones you may use. The course was held at the offices of the Hymettus Walking Team/ POY in Greek, located in Kesariani, near the Local Park/Alsos and Shooting Site, as well as the nearby wonderful mountain of Hymettus. I was very happy because we were fortunate enough to understand the close connection between the natural and historic environment, since the Alsos and the Shooting Site had been a bloody theatre of war; during the Nazi Occupation many male and female fighters of the Greek resistance were executed there. In addition, through the process of interpretation, these places were transformed into something bigger and more important than I first mistakenly thought they were.

We learned a lot of imaginative ways to present a pine tree or an olive tree – two typical trees in Greece – or how you may raise awareness of the ecosystem through role-playing. On the second day (Sunday), we went deeper, delivering our own heritage interpretation for the first time on the mountain Hymettus. I chose to talk about something out of my personal safety zone, that was the fragrant myrtle, rather than a building that I usually talk about on my guided tours. I felt very anxious and embarrassed, and it was difficult for me to apply the guidelines. I felt like a student because of the evaluation. My performance was not as good as it could get.

Two weeks later, we returned for our assessment after the course and it seemed as if we had been almost transformed. As if what we had learned, discussed and presented had settled within us and had borne fruits. On Saturday the on-site collective and demanding work at the National Resistance Museum in the Local Park/Alsos, where there was a variety of historical items from newspapers and pamphlets to very personal items of female and male partisans, was revealing. Within a tight time schedule and with sincere cooperation, each pair presented in a moving and constructive manner these difficult parts of modern Greek history; those parts related to the Resistance against the Germans and the Civil War between leftist partisans and right-wing militaries that broke out immediately after the Liberation from the Nazis in 1944. We had a lively conversation. On Sunday we presented our final project, which filled us with joy and we clearly shared that feeling.

We have all made significant progress since we presented our first project. I was excited and taken over by the phenomenon I chose, a poem written by Nikos Kavvadias, which linked Federico Garcia Lorca’s assassination with the executions at the Shooting Site. And we were standing just at that point revealing the profound meaning behind the words of the poem. The audience felt the intensity of the poem, the common universal concepts of freedom and fight against fascism. Finally, we all sang the song composed by the important Greek composer, Thanos Mikroutsikos, who used the poem for lyrics.

Katerina Kapernarakou is a journalist, story teller and amateur tour guide in Athens, Greece. You can contact her at [email protected].

To cite this article:
Kapernarakou, Katerina (2019) ‘A view of the world using heritage interpretation to navigate’. In Interpret Europe Newsletter 1-2019,11.
Available online:
www.interpret-europe.net/fileadmin/Documents/publications/Newsletters/ie-newsletter_2019-1_spring.pdf