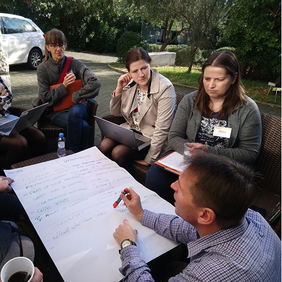 As active members of Interpret Europe, and with great experience in the field of heritage interpretation and interpretation planning, Muses – the company I work for – was invited to join the team that developed the programme of this course. Together with our European colleagues: Peter Seccombe (UK), Michal Medek (Czech Republic) and Helena Vičić (Slovenia), my colleague, Dragana Lucija Ratković Aydemir, and I contributed to the planning and shaping of this five-day programme during the last year. Via numerous correspondence, Skype meetings and several physical meetings, we shared experiences and ideas to agree the course programme.

Apart from training participants in the field of interpretation planning, the task of this pilot course was to set the standards and frameworks for its programme in the future, and so IE’s Managing Directors, Thorsten Ludwig and Markus Blank, plus Valya Stergioti, IE’s Training Coordinator, were also present. Valya was also the official evaluator of the pilot course.

In order for this course to be realised, we needed a good and reliable partner to help with the organisation. In this task, we were joined by the Natural History Museum Rijeka who provided the space of the museum, as well as much more than that. All of its staff really made an effort and gave their best so that the week of intensive learning was above all pleasant for everyone. They accommodated our 30 or so people in the Podmornica (Submarine) – an intimate and inspirational multimedia room inside the museum. Presentations, interactive exercises and games were held, ideas shared, discussions initiated, and we can say that we all grew and developed in everything together professionally.

Last autumn, when we announced the course would be held in Rijeka, we were surprised by the speed of applications to participate and that more people applied than we had places for. Encouraged by the fact that there was a recognised need and due to the importance of training in the field of interpretation planning, we increased the capacity of the course from 18 to 24 participants and divided the participants into smaller groups. Participants from Croatia, Slovenia, the Czech Republic, Bosnia and Herzegovina, Austria, Sweden and Germany took part in the course.

After the introductory part, when the participants were familiarised with the basic terms and principles of heritage interpretation, they were divided into three groups that worked in three different locations: the Natural History Museum Rijeka, the Governor’s Palace (the Maritime and History Museum of the Croatian Littoral) and the ship, Galeb (Seagull). Each group was divided into several smaller teams. Inspired by many phenomena, stories of heritage and their meanings, the participants touched upon the main principles and elements of interpretation planning, considering heritage, the management of heritage, stakeholders, visitors, the meanings of heritage and the messages which are transmitted, and finally they designed and worked out the most appropriate methods for transmitting the main messages – interpretive media and programmes.

The task of the first group was to re-interpret part of the permanent display of the Natural History Museum which relates to insects. At first glance, insects may not seem to be very closely related to people; however, this group found various ways for visitors to connect to these little creatures, to understand their importance and become ambassadors for their preservation.

The second group had the task of interpreting the Governor’s Palace – its significance and the former life inside it. Interpreting history is always a challenge in itself – different teams established different interesting aspects of the perception of the significance of the palace, and it was interesting to see the messages which they formed and the methods of interpretation of this historically significant symbol of the city of Rijeka.

The third group had the task of conceiving the interpretation of the ship, Galeb. The main challenge of this task was the controversial significance of this cultural asset, which was once used as the official yacht of the president of Yugoslavia, Josip Broz Tito. In order to solve this, the participants found appropriate and creative ways of the interpretation of Galeb, primarily to stakeholders – the local population, children, and visitors to the city of Rijeka.

The last day of the course involved the presentation of the working tasks, and we can say that the first pilot course about interpretation planning passed successfully and that the ideas which were born there have the potential to be developed into real interpretation projects! Perhaps in five days it isn’t possible to make an interpretation plan, but it is possible via the synergy of 24 attendees and five leaders to deliberate about heritage and its interpretation and to inspire one another through considerations, dialogue, innovative and creative ideas and suggestions. In order to become certified interpretation planners, the participants need to spend the next couple of months demonstrating that they can apply the process of interpretation planning to a real example and show that they have acquired the necessary knowledge and skills.

We at Muses were exceptionally proud to be involved in the planning of this course and that Croatia had the opportunity to be part of this first kind of course in Europe. We look forward to its further development, so that the interpretation of heritage in the future is well planned, and that all heritage is interpreted well.

Ivana Jagić is a museologist and heritage manager from Zagreb, Croatia. She has worked for Muses Ltd, a consulting and management company in culture and tourism (www.muze.hr), since 2013. She is the Association Secretary of Interpret Croatia and has been a member of Interpret Europe since 2016.