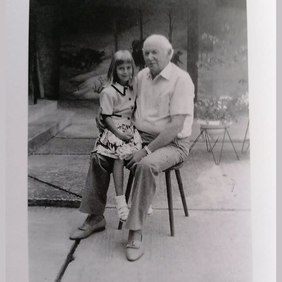 The rich legacy of the peasant-painter, Ivan Večenaj, lives on today through his family – my family.

Me with grandfather Ivan (Image: Večenaj)

My grandfather would have been 100 on 18 May this year and we celebrated him. He dedicated his life to his family, nature, the traditional customs of Prekodravlje, brush and pen – talents that he took full advantage of – he believed in himself and his abilities to the end. Despite his illness and old age, just before his departure in February 2013, at the age of 93, my grandfather finished his eighth and last book. I watched it and witnessed his greatness, as an artist and a man. My whole family and especially my father, Mladen, who was his right hand, lived his art and was part of that world. From birth I was part of an artistic family – part of the naïve born here in Podravina. I visited countless exhibitions and met many interesting people. His life’s work also determined my life, he engraved his character and spirit in his family, so today we can preserve his legacy for ourselves and our visitors in a representative way.

Until 2006, my grandfather Ivan and grandmother Katica lived together in the house that is now the Ivan Večenaj Gallery in the village of Gola in Prekodravlje, near the Hungarian border. A rainy morning in May 2006 took my grandmother away from my grandfather just before they were supposed to celebrate their 60th wedding anniversary later the same year. Time stood still for my grandfather after that, they had raised two sons, Mladen and Josip, in that house. After World War II, they began their toilsome and hard peasant life with one acre of land from my grandmother and 1,000 grabs of land inherited from Ivan’s father and mother. Their sons were growing up and my grandfather was still taking paper and pencil on Sundays or when it was raining and there was no work in the field or around the house. So he entertained the children and enjoyed painting. He had seen from a young age that it was something he was good at. He painted what surrounded him: the yard, roosters and chickens, working in the fields, neighbours going to pasture with cows, poverty and death, weddings, etc. The happiness of these simple scenes smiled to an employee of the municipality when he saw his works in the mid-1950s and asked Ivan to paint a picture to take to Koprivnica instead of goods such as grain or pigs for taxes. And just like that their world began to change slightly from that moment.

Ivan had his first exhibition in 1954 and the rest just followed. He painted and painted, he advanced in the art of painting on glass and nurtured his recognisable style. In the future he will become known as one of the greatest masters of color and a naive painter who placed biblical motives in his homeland, his beloved Gola. During 60 years of creativity, my grandfather exhibited throughout Yugoslavia, Milan, Turin, Paris, St. Petersburg, San Francisco, Florida and more. He met and socialised with a world jetset, like the Hollywood actor Yull Brynner who visited him twice in Gola, Princess Margaret of the UK, and he was twice in an audience at the Vatican with Pope Paul VI and once with John Paul II. But he never forgot who he was, he was never ashamed to say in anyone’s company that he was only a peasant-painter. It was the influence under which our whole family grew – its greatness grew in its simplicity.

Today, the Ivan Večenaj Gallery gives visitors an insight into the painter’s work from the earliest beginnings of painting (the gallery also has drawings from 1934, when Ivan was only 14 years old). A large number of paintings on glass and canvas adorn it, as well as many drawings and watercolours of museum value that Ivan preserved for future generations and a large number of photographs from his life. As part of the Gallery, the studio/atelier of Ivan Večenaj, in which he continuously created and painted, has been preserved. In addition to a rich artistic legacy as a representative of the Hlebine school, Ivan Večenaj left a rich legacy in the written word – he wrote and published eight books, eight of his songs were set to music and awarded at festivals and over many years with his son, Mladen, he collected more than 700 ethnographic objects, which are located in the Ethno-house Večenaj, that today is a protected cultural legacy of the Republic of Croatia.

On my part, it was a privilege to live and share life with him. He was extremely clear-minded, sometimes sharp-tongued but always fair, and always greeted me with some childhood story, an injustice from children who were richer than his family, or with travel stories of his times with other naive painters. As a girl, I came daily to his atelier window where I would see his smile on his face with glass and a brush in his hands. I would shout: “Grandpa, I’m here!” That smile and exclamation is always with me, and now that he is gone I remember his voice: “Oh my little one, come! Let’s drink coffee!” I would spend hours and hours by his side and even though he was busy (painting on glass requires extreme dexterity, concentration and skill) it was never difficult for him to answer my questions or to evaluate my art plays on paper at the time.

The childhood years passed, but the closeness never ceased. Until the very end, the conversations over coffee did not stop. He dreamed all his life, and he wanted his dreams strongly. His thoughts were in line with his dreams and that is why he made most of them come true. His dreams are today in our Gallery, the Ethno-House, on the pages of his books and the memories we spent with him.

Please don’t hesitate to send me an email if you have any questions about our work or would like visit our Gallery or Ethno house. We love to share our family heritage and my grandfather’s legacy with others.

Petra Večenaj Živičnjak has lived most of her life in Gola near the Hungarian border, in so called Prekodravlje. Today she lives with her son and husband in the city of Koprivnica near Gola. Petra works for the Tourist Board of Koprivnica Križevci County as an office assistant and also helps her parents run the Galley and Ethno house, the legacy of her grandfather, Ivan Večenaj, preserved. Petra is an IE Certified Interpretive Guide. She can be contacted at: petravecenaj@gmail.com. 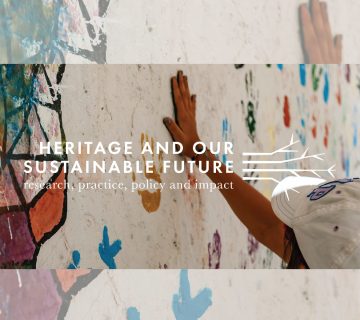 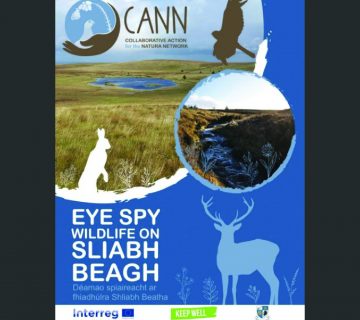 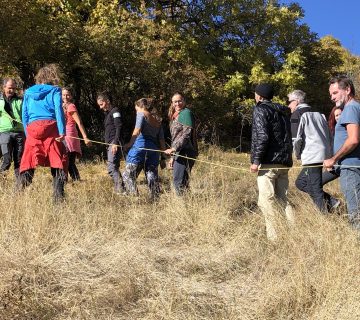 An interpretive breakthrough in a French National Park