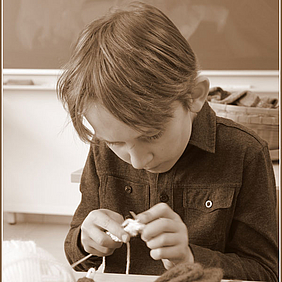 Primary schools in Flanders are taken on a search for the story behind their own neighbourhood. Teachers, parents and grandparents are joining forces with local and regional heritage, culture and nature workers.

Primary schools do not sufficiently use the heritage available in their own neighbourhood as teaching material, in the first place because most teachers no longer live in the neighbourhood of the school. As a result, the school neighbourhood remains the great unknown to the teachers and children. On the other hand, as one of the participants of ‘Buurten met erfgoed’ told, is ‘an intense perception of local heritage, a sensation that goes deeper than Shakespeare and reaches higher than the cathedral’. This project aims to strengthen and structurally anchor the ties between schools and local heritage.

The stories behind things
‘Buurten met erfgoed’ places the school in the neighbourhood and brings the neighbourhood to the school. Pupils do actually have something to say about the environment they live in: about what they consider important, unimportant, valuable or unpleasant; about what they would like to change, or not. Children who look for the story behind the heritage, who learn to see the heritage in their own environment or ‘learn to read’ their own environment, will be able to do the same later on with other environments or the big wide world. Becoming a world citizen begins with paying attention to our own environment.

Old and new
Environment-oriented heritage education focuses on elements like dealing with complexity, amazement, emotion, the urge to explore, giving meaning, vision and talent development, identity, involvement, citizenship and care. Diversity and interculturalism are discussed as well, since everyone in the classroom has their own background, their own story. We use both old and new methodologies or teaching methods: stories, philosophising, critical and creative thinking, systems thinking, art initiation, new media, the creation of an environmental book, etc.

2012-2014: Trial projects
During the school years 2012-2014, trial projects were launched in a number of Flemish primary schools. The participating schools and some local heritage institutions jointly developed a heritage project about, with and in the school neighbourhood. One partner in the project was the school with its ‘child experts’, i.e. the teachers and possibly also parents or grandparents. The other project partners were ‘heritage experts’ from the neighbourhood, district, municipality or region, i.e. key figures, the municipal culture and or heritage service, the local heritage society, local associations and museums, the regional heritage unit or the Regional Landscape which the municipality comes under. An external process advisor made sure the heritage experts tailored their provision or contributions to the school’s needs.

2014-2017: Pilot projects with municipalities
During the school years 2014-2017 we provided more intensive support to all the primary schools in five municipalities. We involved the regional heritage partners more closely in the project and engaged the national youth service, Mooss, to supervise the projects in a more thorough and creative manner.

With the first pilot projects, ‘Treasures in the school neighbourhood’, we (re)discovered the heritage treasures, hidden or not, in the neighbourhood of local and primary schools in three municipalities. In a fourth municipality, we chose the ‘landscape’ angle with ‘The landscape as storyline’ and linked up with the project ‘Open map’ of the Flemish nature and environment education centre, De Helix. This project intends to map how the landscape is experienced by its residents and visitors. ‘Buurten met erfgoed’ approached the project through the eyes of the children from the primary schools.

Our pilot project, ‘Heritage in the mirror’, in the fifth municipality dovetailed with the research project, ‘Culture in the mirror’, of the CANON Cultural Unit. The purpose behind this research is to develop a framework of reference for integrated cultural education.

Working together
The project, ‘Buurten met erfgoed’, is financed by the Flanders Heritage Agency. The content of the project is monitored by a steering group with the participation of several national or regional heritage partners associated with heritage, sustainable development, cultural and environment education and local history.

Jan Van den Bossche is an educator at the Flanders Heritage Agency, Belgium. He can be contacted at: jan.vandenbossche2@pandora.be