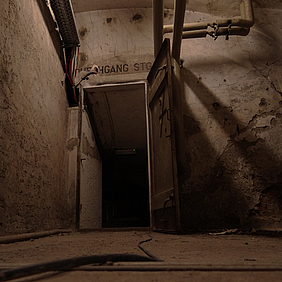 The European Heritage Days provide access to the general public to historical sites which are normally inaccessible, including historical buildings which are undergoing a conversion process.

Preliminary evaluation and building survey are the first steps of each architectural project dealing with the conversion or renovation of existing buildings. As part of these activities, aspects of the history of the objects are revealed, which reach beyond what lies within the focus of preservation organisations.

An example of such a discovery occurred during the preliminary evaluation for the conversion project of the former main post office in the historical centre of Vienna. Building survey revealed older structures as well as layers added by the use of different spaces throughout history. Although restricted to a few underground areas, the remains which testify to the use as an air raid shelter in World War II, strike as the most vivid memento. The most immediate and understandable include:

This material heritage of contemporary history complements the complex modern history of the building, representing events essential to the identity of contemporary society.

Due to the younger age and the original wartime function of this heritage it has a "lower" architectural heritage value compared to Paul Sprenger’s 19th century uniform facades of the office building. The future conversion to housing and hotel includes new underground functions. Because the distribution of WWII evidence traces through the whole basement, their sustainable preservation is impossible.

The only way to provide an experience of this heritage seems to be guided tours limited to the time until the construction works are complete. For the Austrian Heritage Day, the planning architectural office ‘hochform Architekten’ coordinated a low-budget guided tour through the basement, providing a once-in-a-lifetime experience of the former air raid shelter. The tour was designed and conducted by the Cultural Heritage Integration Lab in cooperation with Dr Stefan Wedrac from the Austrian Academy of Sciences.

Events of this kind can only be carried out with the participation of, or at the suggestion of, the planning architects and their clients for two reasons:

The Austrian Heritage Day event didn’t address the protection driving aspects, such as age and presence within the urban landscape. Instead we provided an experience which can’t be repeated due to the upcoming conversion of the building. The positive feedback – not only from the visitors and the preservation authorities but also the developers – encourages us to see a large potential for social involvement in heritage issues through the interpretation of ephemeral assets. The guided tours were repeated within the Austrian Heritage Day 2016 during an on-going planning process.

Claudiu Silvestru is an architect and urban history researcher working at the Cultural Heritage Integration Lab e.U. (www.chi-l.eu) and hochform. Architekten ZT GmbH (www.hochform.com) in Vienna. You can get in touch with him at [email protected].