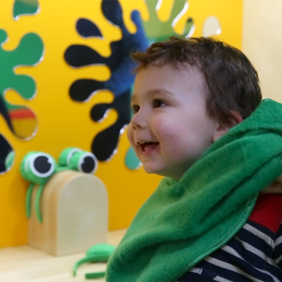 This message is being wholeheartedly embraced by the Wildfowl & Wetlands Trust (WWT) at its centres at Slimbridge in Gloucestershire, UK, and Castle Espie in Northern Ireland, UK, where special immersive play areas encourage young visitors to empathise with nature.

WWT is one of the world’s largest and most respected wetland conservation organisations, working globally to safeguard and improve wetlands for wildlife and people. Founded in 1946 by the late Sir Peter Scott, today wetland conservation work carried out worldwide is complemented with a network of ten UK Wetland Centres. Here, people can have close encounters with awe-inspiring nature – wildlife clusters near water, so there is always something to see at a Wetland Centre, every day of the year.

The centre at Slimbridge operates a wetland-themed immersive play area, called Toad Hall, aimed at pre-reception age children and older, while Castle Espie has indoor soft play in the Brent Play Barn. The idea for Toad Hall play came from the success of soft play spaces that we put into the Pond Zone at Slimbridge and pond room at Castle Espie around 2008. Building on this, it was decided to add a play space to the existing Toad Hall amphibian exhibit, in early 2015, with a soft play area being installed at Castle Espie at the same time.

Slimbridge Wetland Centre has since seen the addition of a new play space which gives children the chance to dress up, play games and enjoy the space provided. The idea was to make Toad Hall a celebration of all amphibians. I was thinking about mirroring and mimicry as I wanted the area to help children relate to amphibians, so there’s a vanity suite with a dressing-up area and mirrors, plus frog costumes to help them transform, as transformation is such a big part of the amphibian story. There’s also a small trampoline where youngsters can jump high like a frog, and the soft play area, which is designed around copying animal behaviour, all of which helps create empathy between children and other creatures.

There are exotic frogs toys in the play area, such as the rockers in the form of red-eyed tree frogs, but our native amphibians are very much part of the story too. I also tried to weave in some cultural elements so there’s a seat with a frog throne, featuring a frog wearing a crown to tie in to the children’s tale of the Frog Prince.

Also provided is a selection of familiar games in the table-top lounge area, themed around amphibians for children and adults to enjoy. Games are themed around classics: Newts and Ladders, Connect Frogs, Guess the Amphibian and lots of puzzles. To keep the zone fresh for people who revisit, these games are regularly rotated. It’s all geared to helping children and adults become aware of and value amphibians.

Toad Hall was designed to enrich the experience for visitors with young children, with a capacity for 30 individuals, providing activities for them to spend around half an hour in the space before moving on to enjoy other areas of the site. It’s great to see this area buzzing in the quieter times: during school term time, for example, Toad Hall is often busy, especially with its target group. Marketing at Castle Espie reported that peak visitation doubled after the play space was opened, and that gave me a good sense of the impact of the facility.

There are now plans to build on the success of Toad Hall and the Brent Barn, with proposals to put wetland themed immersive play spaces into projects for some of WWT Consulting’s international clients.

Beth Môrafon is a Senior Consultant specialising in exhibit design for WWT Consulting; the UK’s leading wetland consultancy and a subsidiary business of the charity, WWT. WWT Consulting (www.wwtconsulting.co.uk) is the UK’s leading wetland consultancy. It provides clients worldwide with visitor centre planning and design – masterplanning, design and interpretation for trails, heritage centres and natural history sites. WWT Consulting’s team creates visitor centres that are financially sustainable, deliver their educational messages and attract visitors. All profits are returned to the parent charity, the Wildfowl & Wetlands Trust (WWT). Beth can be contacted at: [email protected]

To cite this article:
Môrafon, B. (2016) ‘Immersive play areas key to getting children involved’. In Interpret Europe Newsletter 4-2016, 17