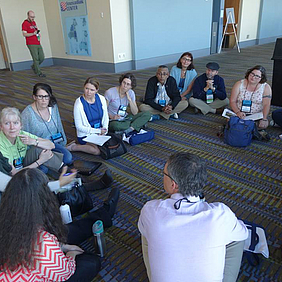 Every year the US National Association for Interpretation (NAI) organises a big national conference. I have managed to attended three of them – Reno, 2013, Virginia Beach, 2015 and Corpus Christi, 2016. The last one was very special and meaningful.

I would like to tell you about some main trends I have noticed. This year they celebrate the 100-year anniversary of the National Park Service (NPS) in the US. We know very well that ideas of heritage interpretation were born in this ‘cradle’. Now there is a real industry of natural and cultural interpretation where NPS, NAI and some university schools are playing a leading role. NPS is launching a new document this year – ‘Foundations of 21st Century Interpretation’. NAI is doing something similar from its side. It was like the mainstream of the conference.

NAI staff, together with their members, started a process of on-going evaluation of professional standards and best practices in interpretation. They are working on competency descriptions of experience or job title, with an expectation for on-going learning, practice, feedback and accountability. A few main interactive sessions of the conference were dedicated to defining new interpretation standards. They asked participants, ‘whether you’re a host, guide, interpreter, trainer, planner, and/or manager, this focus group needs your input! So, what defines you? We are waiting to hear.’ Feedback was very good. Similar meetings are planned during next year all over the country. NAI people hope to finish this great project by the end of next year and to have new standards of this outstanding profession of interpreters.

Another trend I noticed was the growing popularity of IT technology. 15% of all sessions were dedicated to IT; different software, apps, devices, virtual maps, etc. are used as interactive media for a site’s resources to reach new audiences. Augmented and virtual reality is becoming a part of the experience in interpretation. It might be time for all of us to embrace how technology can help us reach our interpretive goals as an augmentation to firsthand experiences.

There were a good portion of sessions dedicated sustainability issues. One of the keynote speakers, Dr. Larry McKinney from Harter Research Institute, raised the question about the role of science. He believes that science and scientists have a lot to learn from interpreters.

Keynote speaker Walt Dabney inspired everybody. When he was 23 years old he travelled with Freeman Tilden (87) as his assistant on a long journey. They travelled 50,000 miles together by car or train, visiting parks and holding meetings. Walt shared a lot of stories and personal histories from that period.

I was very pleased to see that NAI staff promoted next year’s IE conference in Scotland on its desk. Many people from the NAI tribe are intending to join us in October 2017 to discuss 21st Century interpretation skills and competencies.

Dr. Valeria Klitsounova is the IE Country Coordinator for Belarus. She is Chair of the Board of the NGO ‘Country Escape’, and Associate Professor of the Belarusian State University. She is an author of the very first book on interpretation in Russian. She can be contacted at: lera.greenbelarus@gmail.com