The man who invented nature: a review of an outstanding biography 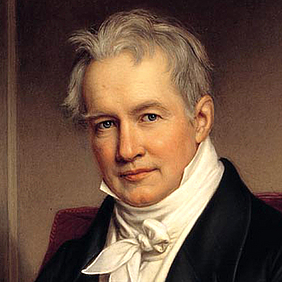 He influenced Goethe, Darwin, Thoreau, Muir, Carson and Lovelock; has the most places named after him, and knew Jefferson, Napoleon and Bolivar… oh and he invented our understanding of nature.

Many of us strive to connect others to nature, but how many of us think about some of the basic principles of our understanding of the natural world? Even those of you who don’t work in the natural environment still have your views and perceptions: not just what we think of birds, trees or rocks but how we as individual humans actually see and understand nature. These basic principles, that we take for granted today, have only been around for a relatively short time and many of them were first expressed by one man – Alexander von Humboldt (1769-1859). The life and times of this remarkable man are brilliantly described in a very readable biography by Andrea Wulf who dedicated 10 years of her life to this story.

We all know about the Humboldt Current off South America, but few remember that at one time he was considered the ‘greatest man since the Deluge’ and on his death American papers commented that he was the ‘most remarkable man ever born’. We sometimes moan about the number of e-mails in our in-box, well when Humboldt was in his late 80’s he was receiving 5000 letters a year – and he responded to most of these. Wulf takes us easily through a remarkable period when human understanding of our place on this World changed from one dominated by our relationship to God to the epoch changing work of Darwin.

He lived through a time of extraordinary change but he himself was a key influence in the progress of science and our understanding of our relationship with nature. The book doesn’t stop with his death in 1859 but looks at the clear influence that von Humboldt had on the classic work ‘Man and Nature’ by George Perkins Marsh – the first time a writer really explores our impacts on our planet’s ecosystems. It links to John Muir and his enthusiasm for von Humboldt which drove his 1000 mile walk down through the States; his lifelong relationship to nature, and the consequential development of the National Park network around the World

This is a great read if you have any interest in how we see this wonderful World of ours, it is well written; well researched; very readable and full of wonderful anecdotes about the life and times of this remarkable man. The movement towards blocking out German influence from European thoughts after the First World War largely erased von Humboldt from Europe’s collective memory.  This book does much to put him back where he deserves to be as the Inventor of Nature. The lesser strap line of the book calls him ‘the Lost hero of Science’ ……well no more!

Bill Taylor is a member of the Supervisory Committee of IE and has worked in nature based tourism and interpretation for over 30 years in Scotland. In recent years he has worked extensively in Scandinavia. You can get in touch with him on [email protected].