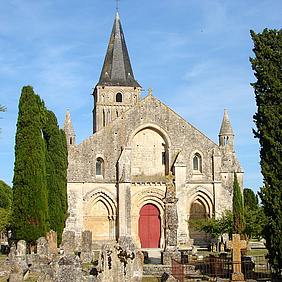 Special events to celebrate the French Via Turonensis route of the Pilgrimage to Santiago de Compostela.

Santiago de Compostela was the supreme goal for countless thousands of pious pilgrims who converged there from all over Europe throughout the Middle Ages. To reach Spain, pilgrims had to pass through France. Four main ‘Via’ have been identified that summarise the innumerable historic routes taken by the Medieval travellers. The Pilgrimage Routes played a key role in religious and cultural exchange and development of France during the later Middle Ages. The spiritual and physical needs of pilgrims travelling to Santiago de Compostela were met by the development of a number of specialised types of building, such as pilgrimage churches, or simple sanctuaries, hospitals and bridges that are witness to the power and influence of Christian faith among people of all classes and countries in Europe during the Middle Ages.

Twenty years ago, an important group of these historical monuments along the routes were designated as a UNESCO World Heritage site. The ACIR (Agence de Cooperation Interregionale et Reseau) is preparing a series of special events on our ‘Via Turonensis’ route to celebrate the 20th anniversary of UNESCO registration of these important historical monuments, including the beautiful Romanesque church at Aulnay, and the former Benedictine Royal Abbey of St Jean d’Angely. For details of this designation see http://whc.unesco.org/en/list/868/ and http://www.chemins-compostelle.com/patrimoine_mondial.

The aim of this celebration is to spread and share knowledge of this rich world-class heritage. We want to raise awareness among the public, especially the young, in order to create a common sense of heritage among the population. The celebration will also develop cooperation with other monuments, especially those in Spain, through partnership, to share a common project between those living on the routes and the pilgrims travelling them. This event is a cross sectorial approach for local development applying lessons learned from the economic, tourism and heritage sectors taking into account the demographics of the region.

The Via Turonensis is used today by new ‘pilgrims’ – tourists from all over the world – and these two relatively unknown monuments in Aulnay and St Jean d’Angely have the potential to attract and create a peaceful refuge for many visitors on their journeys. The celebration is a good opportunity for us to adapt our interpretation tours in those sites and to prepare this 20th anniversary in 2018.

Philippe Laugrand is a tourist guide working in Saintonge Doree, France. (www,saintongedoree-tourisme,com). You can contact him at: [email protected]

To cite this article: