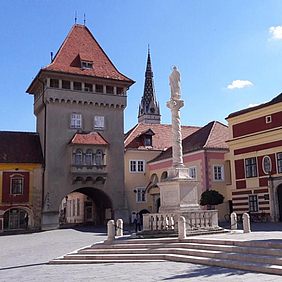 We are happy to announce that our Interpret Europe Conference 2018 will take place from 23 to 26 March in KÅszeg (Hungary).
During the last few days, we have met there with Claudiu Silvestru and Ãrpád BÅczen. Claudiu, our Country Coordinator Austria, is the driving force behind the project, and Ãrpád, as President of the Hungarian Association of Cultural Heritage Managers (KÃME), will be our organising partner.
As you will know, our aim is to link the IE Conference to the 2018 European Year of Cultural Heritage. We considered how Interpret Europe could best contribute to recent challenges and debates and found that ‘Heritage and Identity’ would be an excellent theme. The question of identity is key when it comes to one’s feelings towards Europe in all its diversity and one’s relationship with single nation states, regions and local communities.
One European region where identities most intermingle is the Austro-Hungarian border area. We will therefore run the conference as a border-crossing event, starting our pre-conference tour at Vienna from where we will travel into Hungary and ending our post-conference tour in Budapest.
KÅszeg itself was a free royal town in medieval times and its castle became famous for its insolent resistance in slowing down a huge Ottoman campaign against Vienna. This castle, with its large Knight’s Hall, will be our central venue. Besides this, we will seek to bring alive the surrounding historic centre where there is almost no traffic and all sites are in comfortable walking distance.
Study visits around KÅszeg will lead to places where we will taste local varieties of vine and the famous Hungarian cuisine, and they will also include sites within the border-crossing FertÅ / Neusiedlersee Cultural Landscape (a UNESCO World Heritage Site). Destinations will be as different as Esterháza, the ‘Hungarian Versailles’, which belonged to one of the most famous landowner families of the Austro-Hungarian Empire, or the Pan-European Picnic Park where the Iron Curtain was first lifted in 1989.
The Green Belt along the former borderline between East and West is famous for its stunning natural heritage, especially the FertÅ-Hanság and Neusiedler See-Seewinkel National Parks which are important resting places for migratory birds. One reason why the conference will be in early spring is that we want to include a range of partners from the natural heritage field and also review how nature influences identity.
While we remain focussed on our joint conference with AHI, in Inverness, this October, we have now started our preparation work for Hungary. When we send out the call for papers, you will know much more. For now, please make sure you save 23-26 March for our IE Conference 2018.