The DNA of heritage interpretation 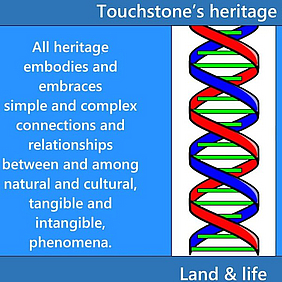 Looking at the interconnections between nature and culture.
I have always been fascinated by the double helix of human DNA ever since it was shown on grainy old TV. In recent years, I have been troubled during my consultancy work by many of those in the natural and cultural worlds who seldom, if ever, look beyond their nature or culture towards culture or nature and, more specifically, the links between the two. I use cultural heritage to include, of course, built heritage.
It took me time to realise that the simple representation of DNA’s double helix is an excellent metaphor for heritage, where the endeavours of people are so heavily influenced by the natural environment, and vice versa, never mind the internal interconnections within nature and culture. In simple terms, very little of nature remains unchanged or untainted by people, and there is very little that people do that is not determined by their environment in all its manifestations.
So was born Touchstone’s heritage genome as my attempt to embrace this thesis in describing ‘land & life’, my most economical, all-embracing term for nature and culture. It’s not perfect, but it’s brief! I keep trying to improve the wording on the illustration below. This is the latest version which I will use at the IE/AHI conference in Inverness in October, as part of my presentation, Folk song as an interpretation of land & life. I’ll be joined by Robyn Stapleton, a leading singer of traditional song, who will contribute her own take on the subject and sing some songs to support her case.
In the meantime, I’d be interested to have comments on the concept and suggestions for further improving the wording. I use the ampersand as a deliberate graphic device.

Michael Hamish Glen of Touchstone Heritage Management Consultants / QuiteWrite, has been a heritage interpretation consultant and creative writer for many years, working throughout the UK and beyond. He helped to found AHI (in 1975) and IE (in 2010) and is an honorary member of both. He also plays a part in the UHI/Perth College MSc in Interpretation: Management and Practice. Michael can be contacted at: glentigstane@aol.com