The Voices of Culture – Talking now about the future of training 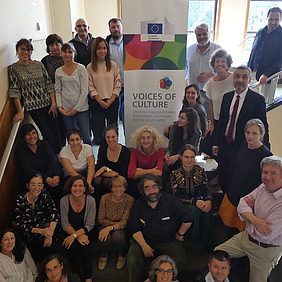 Picture a room-full of representatives from 30 cultural heritage organisations, discussing the future of training in the cultural sector, for one and a half days…

This was the idea behind the Voices of Culture (VoC) initiative held in June 2017, in Brussels. The European Commission organised a facilitated dialogue to ‘listen’ to the voices of major European organisations dealing with cultural heritage, including that of Interpret Europe. An initial meeting was followed a few months later by group work, culminating in a brainstorming report entitled, ‘Towards an integrated approach to cultural heritage for Europe – a prospectus on skills, training and knowledge transfer for traditional and emerging professions’.

The report was presented at the second meeting, in September 2017, to DG Education and Culture staff, who gave us valuable feedback. Finally, Elis Marçal from the European Confederation of Conservator-Restorers’ Organisations and Jermina Stanojev from Politecnico di Milano were chosen to represent the dialogue group and give an overview of this work to the Open Method of Coordination Group (OMC) meeting, in Bucharest, in October.

After the presentation, Elis reported back:

‘…Of course, people commented that the report was extensive, but also very coherent and thorough, with an immense amount of information and broad recommendations. They congratulated the VoC team on the result and were impressed that we produced such high quality work in a very short timeframe and from just two meetings.

They also ran a brainstorming session in the afternoon […] which enabled us to explain in more detail the discussions our group had had in Brussels, together with the questions, doubts, concepts and experiences we shared during our meetings. This proved that the brainstorming session process was useful for their own work.’

The Voices of Culture initiative will continue in 2018, exploring a different theme and inviting numerous organisations to offer their insights at each session. While time constraints restrict in-depth discussion, it is still a good way to communicate our message to policy-makers all over Europe.

Interpret Europe aims to continue being part of this forum, representing us all and reminding people that interpretation sits at the heart of heritage.

You can find out more about Voices of Culture and read our report by following the link:

Valya Stergioti works as a freelance Interpretive trainer and planner and is Interpret Europe’s Training Coordinator. She can be contacted at: valya.stergioti@interpret-europe.net.

To cite this article:
Stergioti, Valya (2017) ‘The Voice of Culture – Talking now about the future of training’. In Interpret Europe Newsletter 4-2017, 11.