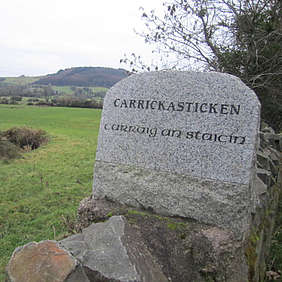 The Ring of Gullion Landscape Partnership in South Armagh, Northern Ireland, is delivering a multi-faceted interpretation and education programme to re-instate a unique place-name system into the community

If we were to suggest today that with one stroke of a legislator’s pen we should remove something that is unique worldwide to Ireland, would we be allowed to get away with it? Obviously not! Especially if this ‘something’ tells the story of our history, genealogy, wildlife, geography and culture. Yet this is precisely what happened in the early 1970s in Northern Ireland when traditional townland names were replaced by rural road-names and numbers. The loss of our townlands, purely for the convenience of government, cut a very immediate link between the people and their place; slicing through stories that were the genetic DNA and lifeblood of the oral traditions which had been collated intimately in the minds of the people.

The loss of townlands and their heritage was sorely felt in South Armagh in particular and our Landscape Partnership decided to design and deliver a multi-faceted interpretation, education and structural programme to re-instate townlands in the consciousness of the people and into the infrastructure of the countryside itself.

We started by developing a teaching resource booklet, available here: https://www.ringofgullion.org/wp-content/uploads/2015/03/The-Townlans-of-South-Armagh.pdf and a map which showed children and teachers how to use existing online resources to look at the local history of their townlands.

Each school in the area was visited and now over 800 children and their families know their townland and the names of neighbouring ones; they know their civil parish, poor law union and the barony in which they live, and examined census data locating their families living often on the same patch of land over the centuries. The children swapped stories told by their grandparents and townland reunion events were held in their communities attracting hundreds of people to tell their townland tales.

We also purchased hand-held recorders, which we loaned to the schools and communities. We asked people to tell stories of their townland and the resulting 1-2 minute excerpts were edited using the free Audacity software and then, using Google maps, were placed on an interactive map on our website. This archive not only records the story but also the local accents and dialects of the area. A fascinating example of a townland voice telling the story of Mounthill Townland can be found here: https://www.ringofgullion.org/wp-content/uploads/2016/10/mounthill-townland-recording.wav

Finally, the project worked with local historians and community groups to map townland boundaries on the ground, using an intimate local knowledge of these areas to decide on locations for townland marker stones. In this on-going project, each townland is to have at least two stones within its boundaries, mainly on the main road crossing those boundaries. These stones will be carved in English and Irish showing the name of the townland that a person is entering. When the project is finished, over 300 stones will be in place and the communities will have a renewed sense of their history and heritage.

Abby McSherry is project officer for the Ring of Gullion Landscape Partnership and the townland stones project is funded by Newry Mourne and Down District council and the Heritage Lottery Fund. She can be contacted at: [email protected]