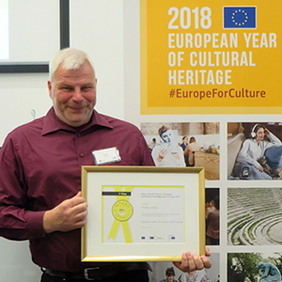 IE Managing Director Thorsten Ludwig received the European Union’s Altiero Spinelli Prize from the initiator of the Prize, Luigi Morgano. The Award Ceremony took place in the House of European History in Brussels.

The Prize includes a grant of €50,000 which will be transferred directly to Interpret Europe’s funds. It has been awarded for the study paper Engaging citizens with Europe’s cultural heritage which resulted from volunteer work of several members undertaken in June 2017 in preparation for the 2018 European Year of Cultural Heritage.

The paper suggests that the relevance of the European idea should depend not so much on economic ups and downs but on the heritage that we share and embrace. For that reason, Europe’s heritage should be considered the true treasure of the European project. If citizens are encouraged to experience and understand the heritage where events actually happened, and to interpret it in a way that fosters Europe’s shared values, this can help to meet the many of the cultural challenges Europe is currently facing. The paper can be downloaded from www.interpret-europe.net/material. Single printed copies can be ordered at www.interpret-europe.net/contact.

We are very happy about winning this Prize which is an acknowledgement of the work many of us have done over recent years. The Prize encourages us in our role of serving all who use first-hand experiences to give natural and cultural heritage a deeper meaning, it increases the interest of other stakeholder organisations in heritage interpretation – and, of course, it provides considerable financial support to continue our work.