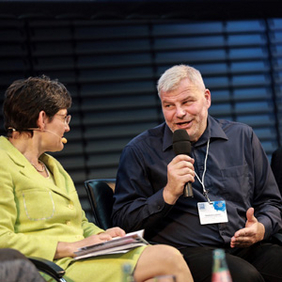 In the centre of the city, more than 60 events took place. One of the most significant occasions was the Excellence Fair where Interpret Europe’s Managing Director, Thorsten Ludwig, was invited to join the panel of the final discussion together with Suay Aksoy (President of the International Council of Museums), Mircea Diaconu (Vice Chair of the European Parliament Committee on Education and Culture), Paolo Fontani (Director of the UNESCO Liaison Office in Brussels), Catherine Magnant (Head of the Task Force for the European Year of Cultural Heritage) and Babette Winter (State Secretary in the Thuringia State Chancellery in Germany). As one of the stepping stones towards the European Policy Debate on 22 June 2018, the discussion was moderated by Sneška Quaedvlieg-Mihailović (Secretary-General of Europa Nostra).

Right at the Brandenburg Gate, where the Berlin Wall once divided the town and Europe as a whole, the organisers presented the Berlin Call to Action. The Call includes the demand that, ‘special attention must be given to history education and heritage interpretation placed in a broader context of Europe’s past, present and future’. The full text of the Call can be found at www.interpret-europe.net/fileadmin/Documents/publications/berlin_call_to_action.pdf.

The Call has officially been welcomed by EU Commissioner Tibor Navracsics and first signed after the European Policy Debate by the Presidents of the three host organisations, Plácido Domingo, Martina MÃ¼nch and Hermann Parzinger. Interpret Europe supports the Call and asks all its members, organisations or individuals, also to sign at www.europanostra.org/our-work/campaigns/berlin-call-action/.

The Summit was an outstanding event and we are grateful to its organisers. The Berlin Call to Action can be seen as one of the precursors of the European Commission’s Action Plan for Cultural Heritage which is intended to be set up during the second half of the year.