Facing the Sun – Expanding the solstice 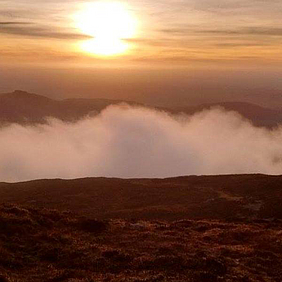 Few can visit the solar aligned passage tomb on Slieve Gullion as it is high, small and inaccessible. So a month-long pre-solstice festival celebrates and interprets the solstice to a broad audience.

In the run-up to Christmas, attention in Ireland focuses on the orientation of the Newgrange burial tomb in County Meath, which faces towards the sunrise on the day of the winter solstice. For many people, this prehistoric phenomenon dating back over 5,000 years has become linked with the celebration of Christmas and the turning of the year, and there is massive interest in attending this event with over 30,000 names entered into a lottery for the few dozen places.  However, Newgrange is not the only place where this spectacle occurs. Deliberate solar orientation is a recurring element of the passage tomb tradition elsewhere in Ireland, including our mountain of Slieve Gullion in County Armagh, and as far afield as Orkney, Brittany and Spain, so there are many other places where people can go.

The increased interest in this seasonal marvel has become its own enemy in the Ring of Gullion Area of Outstanding Natural Beauty where the solstice sunset illuminates the back of the highest passage tomb in the whole of the United Kingdom of Great Britain and Northern Ireland. The problem of more people wanting access to the tomb than can practically gain access, combined with a stiff climb to 573m in possibly poor weather conditions, means that many who would like to mark the solstice, cannot do so. In an effort to celebrate the solstice with the wider public while still allowing the hardy few to undertake the climb, the Ring of Gullion Landscape Partnership developed a solstice festival.

The festival of events, workshops and walks focussed on the twin themes of light and flames along with historical heritage and a little bit of good old-fashioned Christmas sparkle. We ran 16 events between the period of the ancient festival of Samhain (Halloween), which focuses on the darkness, and the celebration of the solstice itself which looks towards longer, brighter days and focuses on light. The events ranged from a solstice mindfulness retreat to a geological exploration of the volcanic and glacial origins of the Ring of Gullion. We also organised fire-linked craft workshops as diverse as candle making, pottery, glass fusing and straw-crafts. People were fascinated by a lecture on cultural astronomy, and the interactive celebrations of two very different local heroes, Hugh O’Neill from the 15th Century and the Iron Age Cú Chullainn, were hugely popular. Our project also helped fund two community plays based on historical reenactments. Each event attracted a different audience with diverse interests, but all shared an awareness of the movement of the earth around the sun and the continuity of this over the millennia.

The culmination of the festival was, of course, the five Cairn Illumination Hikes (one lead in the Irish language) over the solstice itself, allowing 20 people at a time to experience the phenomenon. Despite the notoriously bad Irish weather, two of the walks revealed stunning sunsets which illuminated the entire chamber of the passage tomb and even on the days when the sun did not shine the atmosphere was electric. The hikes held a particular resonance with people seeking a link with prehistoric monuments as expressions of nature-based religious systems, but the interpretive leaders took care not to confuse ancient and largely unconfirmed cosmological beliefs grounded in a particular and complex worldview during the Neolithic with our beliefs and knowledge today.

Over 700 people took part in the festival events and the festival will be repeated next year if we can find sufficient funding to do so.

Abby McSherry is the IE Country Coordinator for Ireland. She works as the project officer on the Ring of Gullion Landscape Partnership funded by the Heritage Lottery Fund and Newry Mourne and Down District Council. She can be contacted at abby.mcsherry@nmandd.org.