Heritage interpreted by school students: HIMIS demonstrated that it works 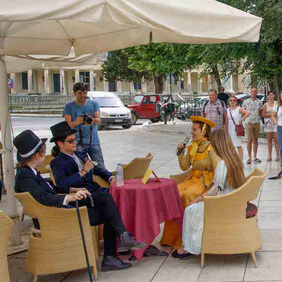 The HIMIS project (Heritage Interpretation for Migrant Inclusion in Schools) – a project of which IE is an associate partner – developed a new approach to train and mentor school teachers aiming to foster the integration of migrants and to challenge exclusionary attitudes at host communities through heritage interpretation.

During adolescence, young people are searching for their own identity; it is the age when questions of meaning become urgent for personal development: beliefs, customs, traditions that have been passed on by their families are challenged, radically by some, more subtly by others. The young people seek to find their place in the world, they long for orientation and meaningfulness.

Cultural heritage of the home town can offer valuable perspectives for this search for meaning. Heritage is about places, events, people or traditions that are, in one way or another, significant for contemporary citizens – otherwise it would not be considered ‘heritage’, but ‘old stuff’. A lot of heritage is connected with stories of achievements of extraordinary people. There are also stories about extraordinary situations that challenged ordinary people or of movements that fought for their ideals. Most of these stories touch emotions because they relate to deep values, and conflicts about such values.

Polish students of 17 years of age at a Wrocław grammar school chose the site they wished to interpret themselves: the famous mediaeval town hall, which demonstrates the change of justice and rule of law during European history. They enacted trials in the old court hall leading to cruel punishments, which we would consider inhumane today. They invited students from other schools to participate in their programme, and the experiment worked: their audience of similar age engaged in the story.

Students in Kerkaya, on the Greek island of Corfu, framed their heritage interpretation as a love story. At original historic sites they let their audience feel what social barriers meant in former times and what was gained by overcoming the restrictions of a traditional society.

Students at a school for vocational education at Anzio in Italy interpreted the relations between the ancient people of the Volsci and the Roman Empire. They showed how invasions, migrations and trade enriched the local culture and food.

At all schools, students from local families worked together in teams with others whose parents or grandparents had migrated to the area. At a German comprehensive school, younger students (13 years old) formed a HIMIS project team: some with Turkish roots, some recently arrived Syrian refugees and Spanish labour migrants, together with German students. They explored the industrial history of their valley, from the cuckoo clock to high tech. They interpreted themes such as equal pay, migration in previous times, equality of men and women, social security and solidarity.

The HIMIS approach encouraged students to interpret the heritage of their local town from multiple perspectives of various local stakeholders. Teachers subtlely guided the thematic focus to historic incidents that resonated with those values that are crucial for an open inclusive society, the fundamental values stated in article 2 of the Treaty on European Union:
The Union is founded on the values of respect for human dignity, freedom, democracy, equality, the rule of law and respect for human rights, including the rights of persons belonging to minorities. These values are common to the Member States in a society in which pluralism, non-discrimination, tolerance, justice, solidarity and equality between women and men prevail.

Exploring real stories from the past and putting oneself in the shoes of different people provoked debates and caused students to reflect upon their own value preferences. And that is the project’s aim: to strengthen the understanding and appreciation of these common values that are rooted in past experiences. HIMIS reduces vulnerability to the simple but divisive answers of populism or religious fundamentalism. For students with migration background, this experience makes integration in modern European societies easier – and that is also true for many from more traditional local backgrounds.

On 17 July 2018, the HIMIS Guidelines and materials for the teacher training course will be introduced at this conclusive conference at the University of Freiburg at which IE Managing Director Thorsten Ludwig will also contribute.

Patrick Lehnes is a researcher at Freiburg University and works as an interpretive planner and author through his company, Lehnes contexte. He is IE’s Cultural Heritage Coordinator and is actively involved in the HIMIS project. He can be contacted at: patrick.lehnes@interpret-europe.net.

To cite this article:
Lehnes, Patrick (2018) ‘Heritage interpreted by school students: HIMIS demonstrated that it works’. In Interpret Europe Newsletter 2-2018, 12-13.