The annual conference – What did you miss? 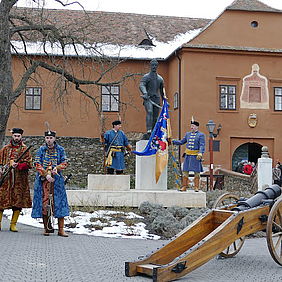 The theme of this year’s annual conference was ‘Heritage and identity’, asking the question, ‘Who are we and where do we belong?’ The answers depend on what we consider our heritage and how we interpret it.

For those of you not able to make it to Hungary and for those of you so overwhelmed by the jam-packed itinerary that you can’t remember, this year’s annual conference was held in the beautiful town of KÅszeg, where we were treated to four keynote speeches as well as an introduction from Tibor Navracsis, the European Commissioner for Education, Culture, Youth and Sport, and a choice of 70 presentations and workshops arranged over five strands: Humanist values; Nature and us; Collective identities; Intangible expressions; European kaleidoscope, all supported by a choice of 11 study visits to really explore some of the local border-crossing heritage and meet some authentic key figures playing an active role in preserving and interpreting this heritage.

The conference proceedings can be found online together with the links to the keynote speeches and some more material at: www.interpret-europe.net/events.

Thanks go to our in-country host organiser, KÃME – the Hungarian Association of Cultural Heritage Managers, especially conference manager, Ãrpád BÅczán, and his team, and to iASK – the Institute of Advanced Studies, KÅszeg, for supporting the conference. As well as all the providers of the great study visits, dinners (who didn’t enjoy having dinner with a Prince in a palace?!) and musical performances. Around 700 Euros was raised in the auction during dinner on the last night, which will go towards the scholarship fund for members on lower incomes to attend next year’s conference.

I am personally hugely grateful to Peter Seccombe for stepping in and delivering the closing speech at very short notice after I became ill during the conference. A summary of his thoughts, tying the themes and messages of the conference together, follows.

Tibor Navracsics, the EU Commissioner for Education, Culture, Youth and Sport, said it was important for all of us to re-connect with our roots and it was especially important to focus on our children and young people. Young people are more able to embrace a European identity. Freedom is a key part of this identity, allowing us to explore and celebrate our cultures and our shared values. There is much more that unites us than divides us.

In his keynote speech, Kenan Malik said that however much we may feel that our identities are fixed, they are in fact always fluid as we re-analyse ourselves. He gave as an example the DNA analysis of a skeleton of a man found in 1903 in a cave in south west England. The skeleton dates from the end of the last Ice Age and the analysis indicated that the person had dark skin. Sometimes our identities can take surprising turns. They can be both more complex, and simpler, than we think they are.

Civilisations are complex structures and our cultures reveal that the past is ever-present in the present. The great civilisations grew up not in places where our cultures were uniform but where a diversity of cultures met, for example, where Islam and Christianity overlapped and became deeply entwined. Kenan Malik gave examples of Cordoba in Spain and Istanbul in Turkey. The Cordoba mosque was a major Islamic centre which was later re-purposed as a Christian cathedral. The Hagia Sophia was built as a Christian church – one of the earliest that still exists today – and was re-purposed as an Islamic mosque. In each case the ‘invaders’ kept the character of the original building. Are their identities Christian or Islamic? There is no single set of Christian, or Islamic, or European values.

There is a trend today to put people’s identities into ‘boxes’, but society is more complex than simple boxes. Diversity is at the centre of debate, and dialogue and debate are a vital part of our civilisation. Minority communities are often regarded as cohesive, yet most minority communities are complex and diverse. Too much thinking can lead to too rigid a view of ourselves – we must use the past to allow us to have a debate about our present.

Ferenc Miszlivetz showed that bringing cultures together can lead to new advances in culture and civilisation. When Buda and Pest were united in 1873, it led to an explosion of creativity. Within two decades, Budapest became the second capital of the Austro-Hungarian empire with a building style – the seccession – that brought together Hungarian, western, eastern and folk art styles.

Constanze Itzel, from the House of European History in Brussels, told us about the creation of this museum. The aim was to present a European, not a national, history, to highlight events and movements that shaped Europe rather than individual nations. The museum chose 14 movements in history that defined the continent, from the influence of the Greek civilisation, through to totalitarianism. It expressed these movements through topics such as major events of war and negotiations, but also through traditional games and food heritage that had close connections with visitors’ own experiences.

We heard in individual presentations about some of the complexities of identities, and how our identities can change over time. We can take on new identities as we re-locate but still keep the identities of our origins. We can also adopt the customs and traditions of others in our communities, sharing and enjoying our varied backgrounds.

The desire to explore and celebrate our cultures can often be spontaneous. Communities around the Great Lakes in the USA, where fishing was a traditional industry, now in decline, had come together to conserve and renovate fishing boats. The project expanded to more than just renovating boats though, with people sharing their stories of fishing and survival, creating oral histories and interpretation activities that expressed their shared culture.

In the final keynote address, we heard from Laurajane Smith’s research on the reasons and motivations for people visiting museums and heritage sites. Generally, people visit not to learn or be educated but to feel an emotion. They want a reinforcement of their existing understandings and beliefs. Heritage sites do not need to transform people, yet 20% of people said that the visit had changed their views about the past and the present.

The site visits took us to places that are peaceful now but in the recent past had been borders of conflict. On one visit, participants heard from local people who had been on opposite sides of the Iron Curtain, sharing their memories of its ‘demolition’. This was a powerful expression of past conflicts changing to present day cooperation.

So, what is the role of heritage interpreters to explain the complexities of these identities? We should not ‘take sides’ in interpreting heritage, cultures and varied identities. But we can present the stories, explaining places, people and environments, for visitors to make their own connections that are relevant to their own identities and experiences.

Marie Banks is IE’s News Coordinator. She has nearly 20 years’ experience in interpretation planning and delivery and works freelance under the name Zebraproof (www.zebraproof.uk). She can be contacted at: [email protected]

Peter Seccombe is Co-Director of the UK environmental consultancy, Red Kite Environment (http://www.redkite-environment.co.uk/). He has worked for conservation organisations and local government, managing nature reserves and protected landscapes. Since establishing Red Kite, he has prepared management, governance and interpretation plans for many organisations, environmental projects, national parks and other protected areas. Peter can be contacted at: [email protected]