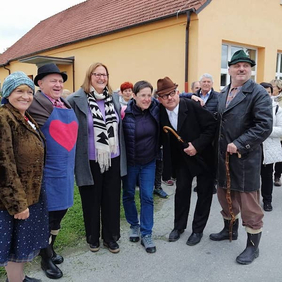 In Sigetec, Croatia, you will meet Regica, a simple village lady who tries her best to look after her household and her husband. She is hardworking, energetic and always says what she has in her mind. Dudek, her husband, is good-at-heart, quiet and naive. They are both fictional characters created by Mladen Kerstner, a Croatian journalist, writer and director who wrote many stories, radio dramas and poems, but his most famous piece of art was two humorous pieces which became popular TV series – Mejaši and Gruntovčani. He created the unforgettable characters of Dudek, Regica, Cinober, Presvetli, Babica and others. The film director, Krešimir Golik, made the stories come alive through a TV comedy called Gruntovčani, which was first filmed in 1974. Soon afterwards they became very popular in the whole ex-Yugoslavia.

The TV series, set in the fictional village of Gruntovec, was filmed in several villages and places like Sigetec, Drnje, and around Lake Å oderica in Koprivnica-Krievci County. It was recorded in a northwestern Kajkavian dialect. The whole crew took about one month of language excercises, especially for the actors who are from non Kajkavian dialect orgins. The opening credits included a song called ‘Pokraj vode Drave’, sung by Ladarice, part of the Croatian professional folk ensemble called LADO, and the opening and closing titles show Croatian naÃ¯ve paintings painted by famous Croatian naÃ¯ve artists from Hlebine, such as Ivan Generalić, Mijo Kovačić and Ivan Večenaj-Tišlarov.

Based on the popularity of the TV series and knowing that many villagers of Sigetec and Drnje appeared as an extra in the series, some young enthusiasts from Sigetec and Koprivnica decided 20 years ago to join together in the Folklore Society Gruntovec and started to put on plays based on Gruntovčani humour depicting actual themes from today’s society. They organise the event, Gruntovčanijada, which is held in Sigetec and every year original actors from the TV series come as special guests. Unfortunately, the orginal actors are getting older and only three of them are still alive. The local government doesn’t recognise the benefit of their work, and there is no money available to support their work, but they continue to do this to keep the tradition and heritage alive, which is extremely important to them. They hope one day that they will become more visible and pick the fruit of their dedicated work and pure love of the local tradition. If you ever visit the Podravina Region of Croatia, please, stop and visit Sigetec – even if you don’t understand the language, you will understand the vibe of the good old times. A group from Slovenia visited Sigetec thanks to Dominika Koritnik Trepel (an IE Certified Interpretive Guide) and they enjoyed the interpretation so don’t just take my word for it – take theirs!

Elizabeta Milanović Glavica is a university specialist in tourism and hospitality management from Koprivnica, Croatia. She works for the Central Podravina Tourist Board (tzp-sredisnja-podravina.hr). She is a member of Interpret Croatia and Interpret Europe and is an IE Certified Interpretive Guide (CIG). She can be contacted at: [email protected] or [email protected]