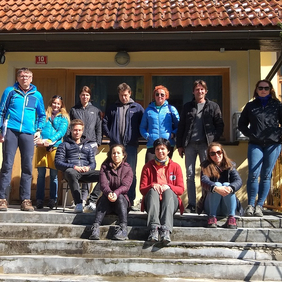 Geopark Karavanke/Karawanken is a crossborder UNESCO Global Geopark located between two Alpine mountains that exceed 2,000 metres: the Peca/Petzen and the Košuta/Koschuta. It includes 14 municipalities (five on the Slovenian and nine on the Austrian side) and extends over an area of 1,067 sqkm with a population of 53,000. Geopark Karavanke/Karawanken was established in 2011; in March 2013 it became a member of the European- (EGN) and Global Geopark Network (GGN). The geopark is marked by very rich geological variety between the Alps and Dinarides; 48 geosites and 14 geopark localities, equipped with information or interpretation boards, demonstrate the great geodiversity of the area (the oldest Paleozoic rocks, important mineral and fossil deposits, deposits of metallic minerals that were excavated in the past, karst caves and other karst formations, evidence of former volcanic activity, etc.) which is exceptional and unique on a global level.

The Certified Interpretive Guide (CIG) courses took place as a part of an INTERREG Slovenia – Austria project with the akronym NaKult. The NaKult project – geological hiking experiences in Geopark Karavanke/Karawanken, among others, also involves developing and equipping a long-distance geotrail which aims to valorise and enhance awareness of the Geopark’s rich geodiversity. Trained guides are required for engaging visitors with the geodiversity as well as the other cultural and natural peculiarities of the path. Therefore, two CIG courses were organised by the crossborder Geopark Karavanke/Karawanken, the Institute of the Republic of Slovenia for Nature Conservation (IRSNC) and Interpret Europe (IE), one in German and the other in Slovenian language. The CIG course on the Austrian side took place in the Geopark Karavanke/Karawanken administrative centre in St. Philippen, municipality of Sittersdorf, and it was led by Thorsten Ludwig. The CIG course on the Slovenian side was implemented in the former branch school in Koprivna, municipality of Črna na Koroškem. It was organised by Helena Vičič.

I had a chance to participate in the CIG course on the Slovenian side. Together with 11 other participants we met in Koprivna, in the former branch school. The school has been uninhabited for the last few years because all the children joined the main school in Črna na Koroškem. Our group was quite diverse, with different professional backgrounds, from geologist, geographer and computer engineer to journalist, graphic designer, social worker. But for the first hour we realised that we all share a common bond with nature. We found out that the combination of some theory and a lot of practice is the perfect combination. We developed multiple stories mainly in connection with natural heritage, but we also touched the field of cultural heritage, since we visited the mining museum in Meica, where various collections are exhibited, including the flat of a miner’s family.

It was a great pleasure for me to be a part of this event. The CIG course was very inspiring, practical, interesting and useful. If only for a few days, we managed to return to life back at school and realise what is the most important – besides the new knowledge gained, new friendships were born.

Darja Komar studied geology at the University of Ljubljana. She has been working in the Geopark Karavanke/Karawanken since 2016. She is involved in various international projects (INTERREG SI-AT, HORIZON 2020), most of them contribute to conserving, protecting, promoting and developing the natural and cultural heritage of the Geopark area. You can get in touch with her at: [email protected].