The dark heart of Gantrisch 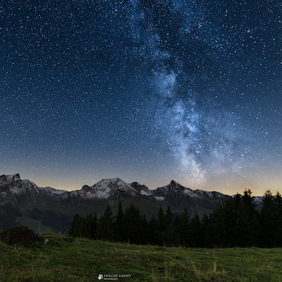 The project ‘Nightscape’ in Gantrisch Nature Park, Switzerland, aims to protect and preserve the natural night darkness of this mountain region and to sensitise people to the value of darkness. In 2007, the starry sky was declared a universal cultural asset by UNESCO, which defines starlight as a ‘common and cultural heritage and as an integral part of the environment perceived by humanity’. Humanity has always observed the starry sky in order to interpret it and understand the physical laws that govern the universe. Astronomy has always had a profound impact on science, philosophy, customs and our general view of the world. With our project we want to make the night an experience and have therefore developed a guided tour called ‘From Light into Darkness’ or ‘The dark heart of Gantrisch’.

Our natural and cultural area is the nocturnal landscape on the Gurnigelpass near Bern. The excursion starts at Gurnigelpass at 1600m elevation above sea level. The landscape is protected as a mire landscape of special beauty and national importance and lies in the tourist hotspot in the Gantrisch Nature Park. On beautiful weekends hundreds of cars park here, thousands of hikers explore the beautiful peaks. In the evening it gets quiet again. Then the nature park becomes a star park. You can see here thousands of stars with your naked eye. We stand in our dark heart, which beats continuously. Here, the day and night rhythm and the moon cycle may still play almost without artificial light effects.

We are just about to gain our first experiences with the guided tour, which starts at dusk and leads into the night. My colleague is a nature pedagogue and biology teacher and already has some very good elements in her guided tour that encourage the participants to be quiet and attentive. I have already successfully completed the guided tour, too, but I noticed that a night excursion completely differs from excursions during the daytime: I do not see the participants. A night tour also makes the participants much quieter. This means that I cannot read any reaction in their faces to the things I say, and requests to speak are much sparser. I am also not a monologue person and have a bad fact memory, so I was looking for a more interactive concept for guided tours. With this hope, I joined an IE CIG course – and expectations were exceeded.

I developed the concept for a short interpretive walk as my homework. For the first time I stood in line to look for phenomena. It is dark at night, so I cannot see anything! In November, you could not hear a single bird singing and in the cold and in the first snow you hardly smell anything. I told a colleague that I saw nothing but the lights of the city, a parking lot, the mountain range with the Milky Way above us, the dark forest entrance. She said: but that is quite a lot! Which was true. Therefore, these were my phenomena. Since the tour was booked in the middle of the two weeks between parts of the CIG course, I had the opportunity to test elements of the tour. As a theme, I chose: ‘In the heart of the Star Park, on the Gurnigel, there is a nightlife of its own’. As feedback, I received an idea from Thorsten Ludwig, IE Managing Director who was leading the course: ‘Where we can feel the night, we can feel the heartbeat of the earth’, which, of course, fits very well to the dark heart idea and I like it even better.

Many people signed up for the guided tour and so with 25 people I went into the darkness. I encouraged them to walk quietly and to sharpen their hearing. After a short walk we arrived at a large flat square, with a view over the lights of Thun and up into the clear sky above us. With a thought journey to Alpha Centauri, the participants experienced the enormous distances between us and the stars. During the sea of lights, we discussed where the light comes from and its meaningfulness. Standing on the parking lot, people could tell about their experiences on the Gurnigel – and how the place turns its face when night falls. The theme was: ‘This place has its own laws at night’. We slowly went up a hill and let the dark forest entrance have an effect on us, according to the theme, ‘In the dark forest there is no more reliance on human eyes’, or ‘We always see only a part of the whole – especially in the nocturnal forest’, where we among other things went into what is going on around us and how animals orient themselves. In order to sharpen the senses, we then walked through the forest in a queue of people on a rope, which the people perceived as the strongest experience, because they had to completely rely on all other senses and on the people in front of and behind them.

The feedback was very good, although the conversations could have been more lively. I am sure I will be working on it more and look forward to the next tour (with my CIG course colleagues).
Maybe some of you already have experience with night excursions – I’d be happy to have an exchange!

Nicole Dahinden is a geographer and currently works at the Gantrisch Nature Park in the Forderverein Region Gantrisch, Bern, Switzerland (www.gantrisch.ch  www.sternenpark.ch). She has been working in this field since 2013. Nicole can be contacted at: [email protected]