The phenomena of Elefsina revealed by interpreters 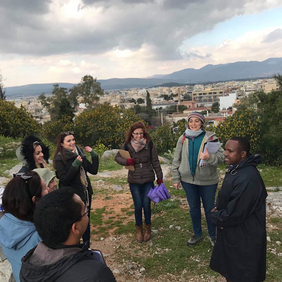 They say that only living creatures have souls. We say, however, that buildings and artefacts have souls, too. They are much more than materials, details and decorations. They have their own stories but only tell them to those who know how to reveal and give them meaning.

For almost a week, the city of Elefsina in Greece showed us every story, starting from its heroes’ square, to the war monuments, proud akrokerama (more on that later!), a Roman bath, ancient archaeological sites, to the green laurels, pine trees, colourful oranges and the quiet sea. It seems that Hermes, Pluto and Mithras were not legends after all, but they lived indeed once upon a time and their presence never left the small yet multilayered historic city.

Thirteen interpretation lovers under the guidance of Valya Stergioti, the passionate Certified Interpretive Trainer from IE, and with the help of the Heritage Management Organisation, discovered multiple stories and created dozens of walking trails by connecting heritage and natural sites. Everyone was amazed by something, whereas I personally was intrigued by the frozen face of Hermes – the messenger of God, the protector of thieves. It may look only like a terracotta building decoration, but akrokerama is much more than that. It is one of the things that give meaning and life to a building.

We were amazed by vivid trees planted on the edge of streets and oranges falling freely from them. We were very lucky to try the traditional orange peel preserve as well as lemonade. Apart from these traditional recipes they also had hidden narrations. Who knew these fruits can have such an emotional impact on us! So, they say if life gives you lemons make lemonade, but instead we made great stories out of them.

Kaltrina Thaçi is a conservation architect and Interpret Europe Country Coordinator for Kosovo. You can get in touch with her at: kaltrina.thaci@interpret-europe.net.

To cite this article:
Thaçi, Kaltrina (2019) ‘The phenomena of Elefsina revealed by interpreters’. In Interpret Europe Newsletter 1-2019,13.
Available online:
www.interpret-europe.net/fileadmin/Documents/publications/Newsletters/ie-newsletter_2019-1_spring.pdf