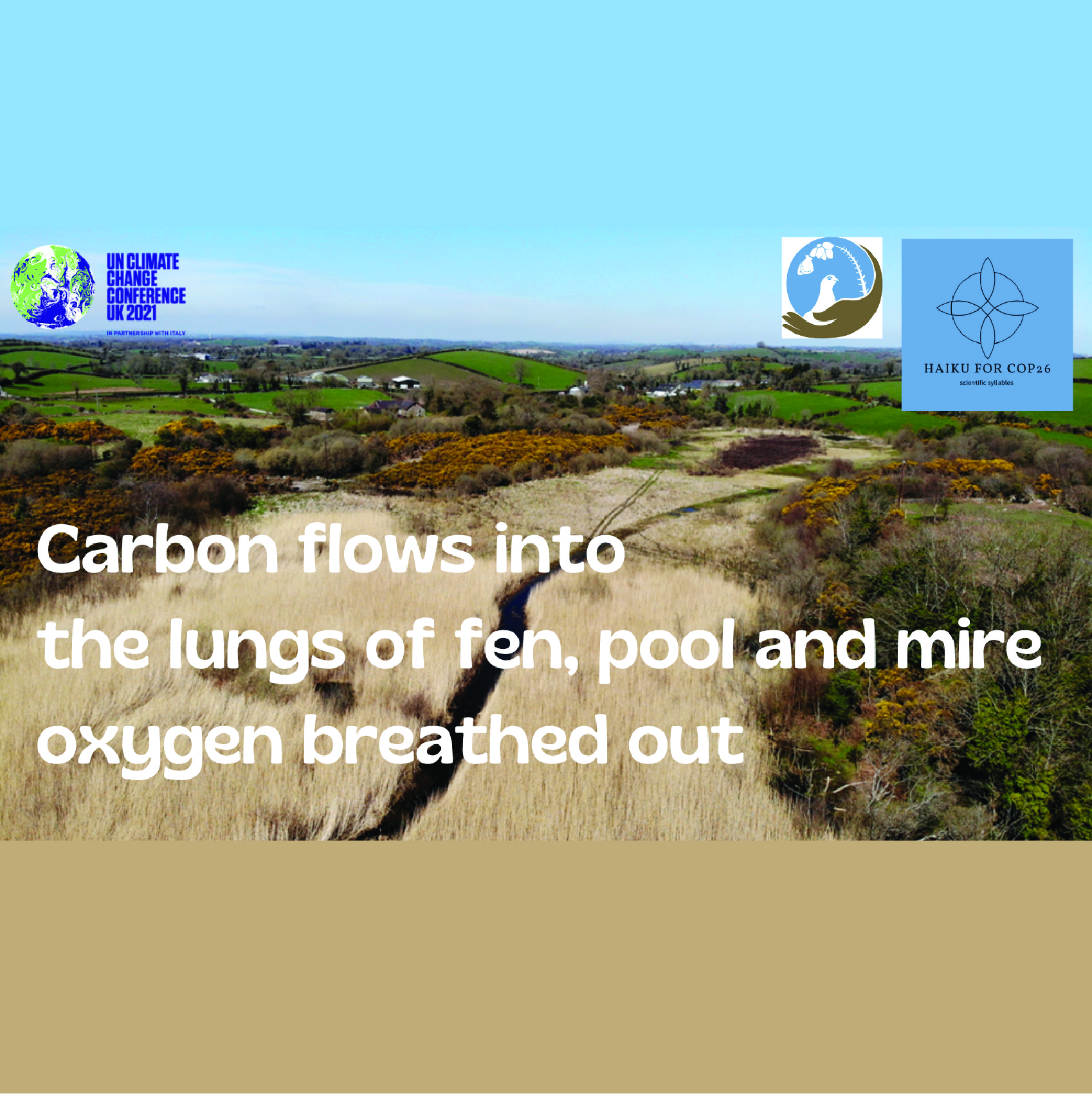 This ancient form of Japanese poetry lent itself to interpreting the science of bog restoration and carbon capture on Twitter.

In the run-up to COP26 in November, social media was aflame with hockey-stick diagrams and best-fit-worst-scenario graphs of probability, many of them only understood by the scientists that drew them. I work as the communications and outreach officer for a wetland conservation project covering parts of Ireland, Northern Ireland and Scotland (The CANN project www.theCANNproject.org), and my work primarily involves interpreting peatland restoration and the science behind it. The impact on biodiversity and the potential impact on humanity from carbon capture through this work is enormous. So, it seemed that COP26 was an excellent opportunity to get across some of our key messages and focus on our work. But I really felt that these stories were all being shared in the same way and wanted to do something different.

The “something different” turned out to be a series of 31 daily haiku (or Sciku) on the theme of climate change and peatland science published on Twitter. A haiku is a type of Japanese poetry made up of 17 syllables in three phrases (5,7,5). Haiku traditionally tend to be associated with nature, have a seasonal reference, and contain images of juxtaposition. This structure called out to our stories, but I did have to break some of these rules (sometimes all at once).

The haiku form that was a perfect canvas became even more apt when I discovered the ‘Sciku’, a portmanteau word for scientific haiku – the structure of haiku but with science and mathematics as subject (www.thescikuproject.com).

Arts have a huge role in communicating science to non-scientists and can be a valuable bridging tool in helping interpret scientific principles. The haiku or sciku is short and sweet. Anyone can write one and trying to distil scientific messages into this most concise mode of communication appeals to scientists. I also felt that haiku was ideal for our main social media channel, Twitter, with its strict character count and the short attention span of its readers.

However, I did run into one major problem: I work with a team of 30+ scientists, and with a two-month warning, I did think I would receive more than three haiku submissions by the deadline. But folk are busy, and most were not confident in their literary skill. So, although this project started as a group one with colossal encouragement and positive comments and promises from all, it ended as a DIY affair with some help from the Scots up on the Isle of Islay.

Each haiku was presented on a background of images captured by the CANN team over the last few years, along with a few credited professional photos. I used a template I created on the desktop publishing app CANVA to manipulate and present these images to reflect the content of the poem. Each image was then accompanied by a brief explanatory sentence in 280 characters or less to explain the science behind the haiku’s theme.

The response on Twitter was phenomenal: our impressions rate increased by 30,000 over our average monthly rate, our profile visits increased by 80%, and our number of followers increased by more than twice its usual monthly increase. The feedback from everywhere from the USA to New Zealand, UEA and India was fantastic. As a result of this feedback, I was encouraged to publish the collected haiku as a small digital flip-book using the website www.ISSUU.com to do this for free. The collected haiku can be found here: https://issuu.com/thecannproject/docs/haiku_for_cop26

Abby McSherry works for Newry, Mourne and Down District Council, the lead partner in the CANN project. The CANN project is funded through the European Union’s INTERREG VA programme managed by the SEUPB. Abby can be contacted at: [email protected].