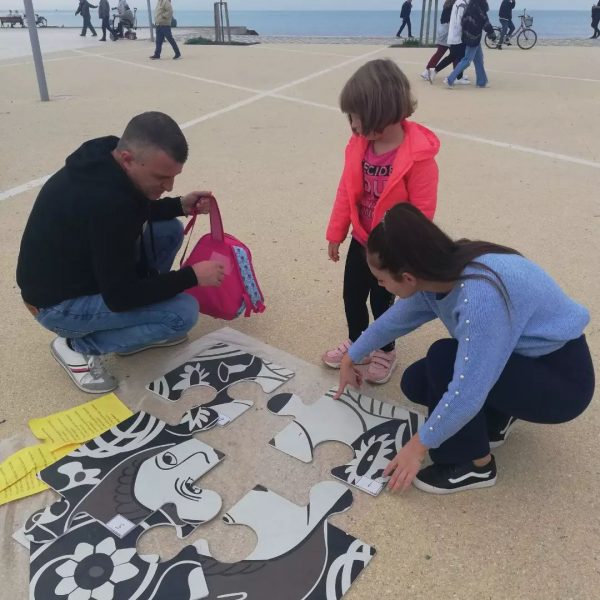 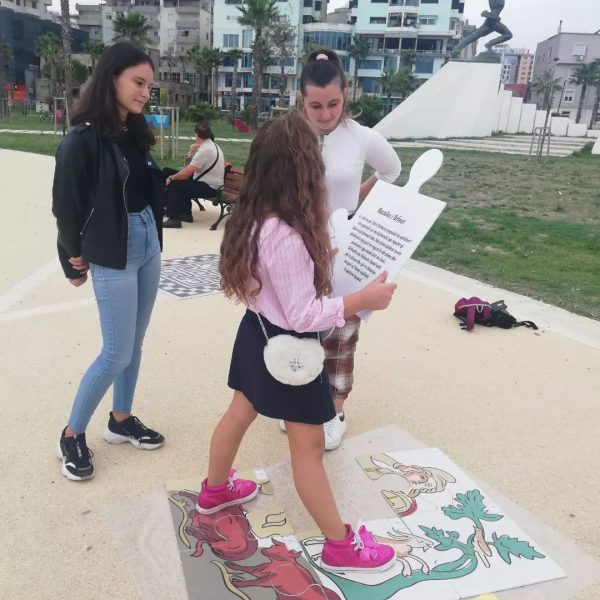 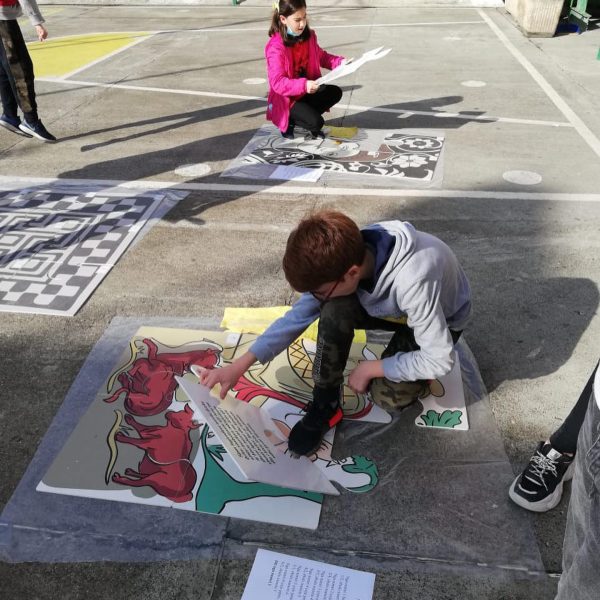 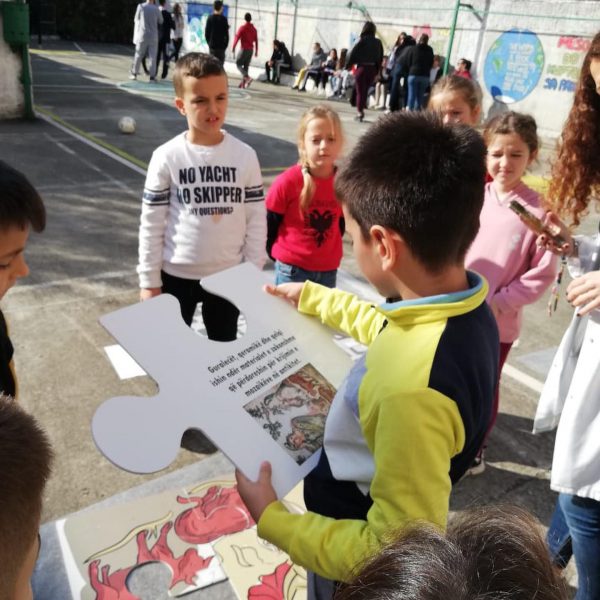 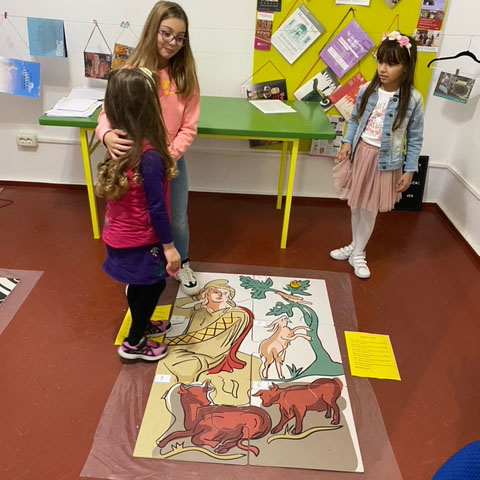 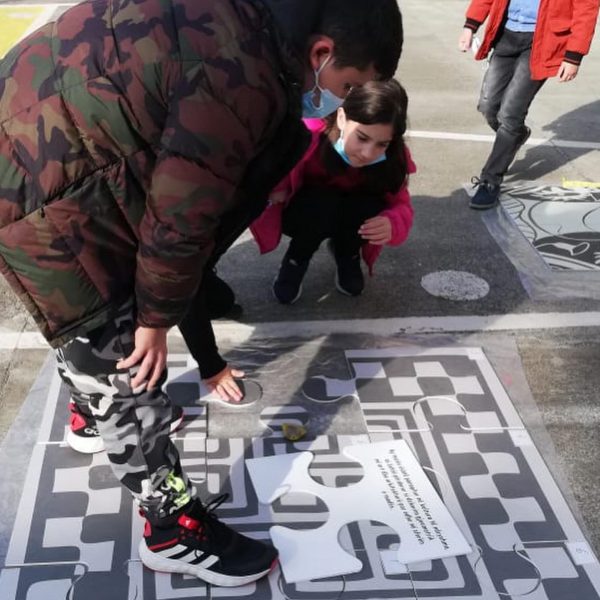 An Albanian playground game based on mosaics inspired a project developed by MuZEH Lab.

The Center for Development of Museums, Heritage and Culture – MuZEH Lab is a centre opened for the community in April 2021 based in Durrës city, Albania. The centre was founded with the mission of creating a new philosophy of using the discipline of museology, heritage and culture as a way to educate society, advocating for museums and their professionals and creating civic activism and dialogue through various forms of heritage, arts and creativity. MuZEH Lab is a cultural community-based centre with a museum-based approach (a hybrid format), aiming to work closely with communities to increase cultural awareness in society, and turning them into future actors of social change and towards their designation as European citizens.

The background
The Movable Carpet Project aims to preserve in a visual way three important mosaics of ancient Durrës (Dyrrachium), two of them lost as not accessible and the other one removed from its place of origin and exhibited in the National Historic Museum in Tirana. As history shows, Dyrrachium has a long archaeological and civilization history since its foundation in BC627. Through the centuries the city has shown different cultural approaches, changes and development. But as centuries have moved from the Corinthian colony to invasion of the Roman Empire through to the Byzantine and Ottoman periods, the city has shown a vivid experience of living, learning and resistance. With the different cultures, ancient local inhabitants exchanged and learned old and new techniques of pavement decoration, which has shown up during vast archaeological excavations.

This project consists of creating a playground mosaics game. Through this, we want to put people into pieces of history when photography didn’t exist, as the possibility of admiring and engaging with art production. We aim to engage people (but mostly children) through methods of informal learning, engagement, inclusiveness, fun and knowledge about the mosaics and provide reflection on the values they provide – especially to those mosaics that are no longer accessible.

Many citizens of Durrës don’t know about these sites, as their location and the details is information more likely known by academics, archaeological professors and cultural management practitioners. With so little known about their presence, people’s curiosity can’t be sparked and, in that sense, we have an inequality of knowledge and thus a lack of appreciation for common cultural heritage.

Equal knowledge about heritage should be a right of education, relevant also for further transmission to future generations, but in this case that knowledge transmission is missing.

This playground game is designed around three mosaics: Orfeu, Beauty of Durrës and Meandri.

The mosaic of Orfeu as it is commonly known even in archaeological literature, belongs to the second century AD according to archaeologists. Its discovery in the basement of a house in Durrës dates back to 1988 and it was declared as a cultural monument of the first category. It cannot be approached or visited since it is currently being preserved in situ.

The same is true of the mosaic of Meandri, which also lies in the basement of a building and is flooded by water. It was also declared as a cultural monument of the first category for preservation and access to it is impossible. It expresses geometrical forms as a labyrinth, a design that has been present in pavement decorations in Albania since the first century BC.

Known as the ‘Beauty of Durrës’, the mosaic of the announcement of spring portrays a polychromatic girl surrounded by flowers and leaves and has a long archaeological history, dating back to the fourth century BC. It was first discovered during 1916 by Camillo Prashniker and covered again losing the first orientation. After many years it was re-discovered and documented by an esteemed archaeologist, Vangjel Toçi.

The movable carpet playground game is conceived as a movable puzzle so the activity can be enjoyed in different places. The activity uses several methodologies for achieving appreciation of the historical and decorative significance of these ancient mosaics. We also want for adults to rediscover their connection and emotions with their childhood when games were a major healthy activity of everyday life. The game is mentored and people are guided through it with particular information after each puzzle; historical evidence presented in an interpretive way (period, style, colors, symbols, quizzes, and with place orientation coordinates). This entertainment and engagement outside the home and without technology inspires children to delve into history and enjoy a cultural discovery.

Between the end of September and mid-December 2021, a total of 100 children aged between 6-11 got to play this playground game, along with 20 teachers and heritage professionals in four different spaces: MuZEH Lab, a school and public space in Durrës city.Thanks to the support of Goethe Zentrum Albania for funding this project. MuZEH Lab is also thankful also to the students of archaeological tourism at Aleksander Moisiu University and volunteers for mentoring the workshop.

Inesa Sulaj is from Albania and is a co-founder of MuZEH Lab. She is currently studying for an MSc in Museum Studies at the University of Leicester, UK. She can be contacted at: [email protected].

Dorina Xheraj-Subashi is a co-founder of MuZEH Lab – Center for development of Museums, Heritage and Culture. She also teaches topics in Museum Studies and Cultural Heritage in the Tourism Department of Aleksandër Moisiu, University of Durrës, Albania. She can be contacted at: [email protected].