Don’t Get Mad – A game inspired by Albanian heritage 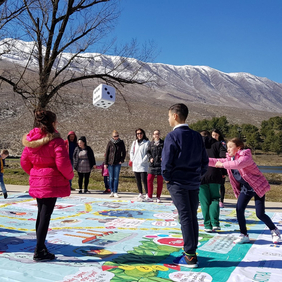 Don’t Get Mad (Mos u Nxeh) is a popular Albanian game that inspired a project developed by Cultural Heritage without Borders Albania.

Playing Don’t Get Mad in the outdoors (Image: CHwB)

The Don’t Get Mad sub-series was awarded the 2018 European Heritage Stories prize by the Council of Europe and the European Commission. Let’s explore a bit more about the project…

This game was very popular during Albania’s communist times (1944-1991), a time of extreme cultural, political and social restrictions. Through this game, social traditions and historical values were passed on from one generation to the next. In the original game, players took turns rolling the dice, with the ultimate goal of reaching the finish line first. However, to achieve this, players had to make it through numerous traps and penalties, making victory as important as the path that led to it and not to lose their ‘cool’ in the process (hence the name, Don’t Get Mad).

The new Don’t Get Mad

Cultural Heritage without Borders (CHwB) Albania revisited Don’t Get Mad not only to breathe new life into this traditional game but, in line with its original philosophy, to re-purpose it to inspire and develop people-centered ways of education on cultural heritage, its meanings and uses in society today.

The idea began in December 2018 and the first three designs were created in March 2019. Don’t Get Mad board games were created representing three of the most important historical Albanian cities: Berat, Gjirokastra (World Heritage Sites) and Korça. A team of 16 highly talented and dedicated co-creators, including illustrators, authors, educationalists and animators, developed the game. It was then expanded to include other important cities in Albania: Tirana, Durres, Elbasan and Shkoder. Within two years, 103 Heritage Ateliers were implemented. These were held in schools and assisted by teachers and CHwB representatives. Lasting 60 minutes, the game was played simultaneously by four children.

A total of 2,949 children aged between 6-11 got to play the game, and 300 teachers, heritage professionals and parents participated in this new entertaining concept of thinking about cultural heritage as a resource. In addition, five big open-air Don’t Get Mad activities were organised in public squares in five cities and in total, 30 cities and villages in Albania hosted at least one Heritage Atelier.

Thanks to the support of the Council of Europe and the European Commission through the grant from European Heritage Days, CHwB Albania has also expanded – to 65 – the network of partnering schools, local culture structures, businesses and municipalities that advocate for inclusion of the game in the national curricula of qualitative heritage education tools. A pilot national programme is being run in partnership with the Ministry of Education.

Given the lack of similar activities in the national education curriculum, it was challenging to set up a calendar aimed at working directly and consistently with the same teachers or specialists in heritage interpretation and education. It was also a challenge to adapt the project for delivery in both urban and rural communities. The lack of financial resources and excursion activities in the curriculum excludes pupils from rural schools, who are unable to visit and get to know close up the main historic/cultural landmarks in their own regions.

Speaking as a volunteer, I witnessed a variety of emotional reactions from the kids. I noticed first-hand their reaction of not knowing the sites and cultural or natural monuments in their own cities. This is due to many reasons, from lack of extra-curricular activities to their parents’ idea that these sites have nothing to offer for their age.

The game triggers competitiveness in kids and many of them have asked us to come back and offer more board games for them or for their friends and siblings. The feedback from parents was equally positive. Many parents wanted to buy this game to play with their kids at home. At the end of the game, kids talked about the new things they learned and made us feel accomplished for teaching them new things through playing. This experiment made us happy, yet it calls us to take up the responsibility to increase the impact of our work through similar educational activities by involving more children, parents and teachers in more cities.

The Don’t Get Mad board game experience constituted a great opportunity to test new ways of reaching out and encouraging individuals, from the earliest age, to acknowledge, appreciate and care for values such as diversity, peaceful coexistence and democracy. The feedback from teachers indicated that it fulfilled their needs and demands for alternative activities. The added value of this approach is that it unites different stakeholders, such as schools, cultural centres for children, municipalities and other organisations, in a sustained and coordinated effort to champion heritage and provide an opportunity for people to explore it from a young age.

Projects like these also offer an opportunity for professionals, organisations, and institutions that operate in difficult contexts, to develop heritage communities at a grassroots level. The Don’t Get Mad project develops informal education and learning tools that fulfill the needs of today’s society, by contributing to positive changes in the education system and curriculum.

If you would like to try out a simplified version of the Don’t Get Mad (Mos u Nxeh) game, follow the link below. Print the four pieces and glue them together; then, grab a dice and four buttons of different colors and you are good to go.

Mirian Bllaci is an urban planner and manager. Through experiences in the region and abroad, he has developed a strong interest in designing and implementing activities aimed at connecting people and heritage. He works at CHwB Albania as project coordinator for educational activities. He can be contacted at: mirian.bllaci@chwb.org.

Inesa Sulaj is Interpret Europe’s Office Manager. She works as a cultural heritage expert and has a particular interest in museology. She can be contacted at: inesa.sulaj@interpret-europe.net. 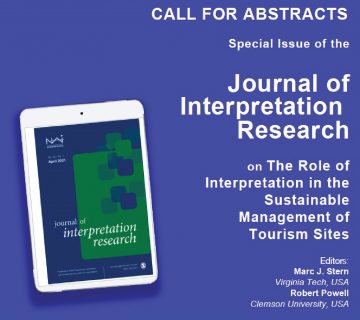 The role of interpretation in the sustainable management of tourism sites